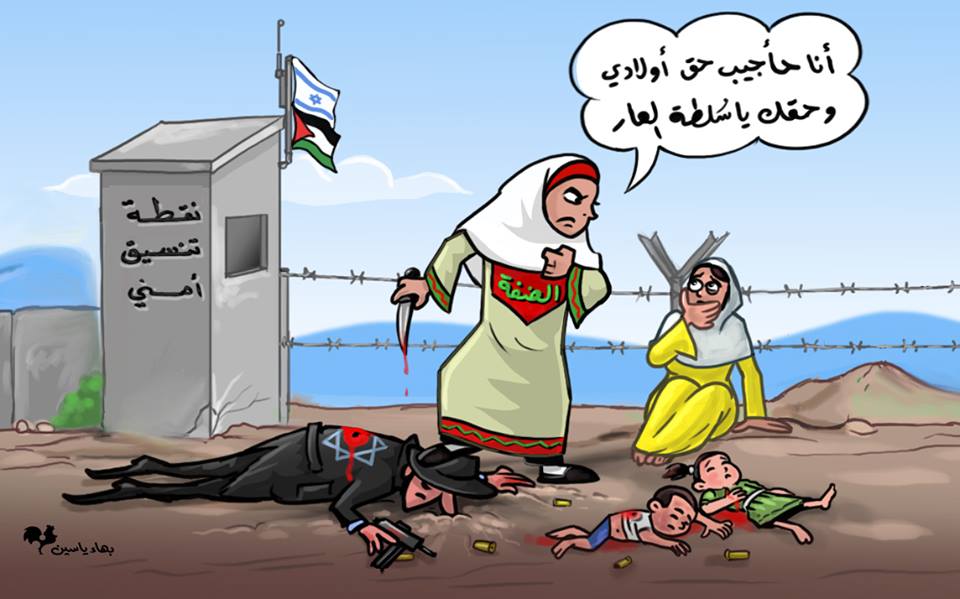 Yassin is well known for violence-tinged and sometimes crude caricatures. The one that initially caused consternation across the Palestinian political spectrum is described by the Times of Israel:

[A cartoon] depicting the West Bank as a woman dressed in yellow — a color associated with Mahmoud Abbas’s Fatah party — engaged in sexual intercourse with a stereotypical ultra-Orthodox Jewish man, symbolizing Israel.

Through the caricature, Yassin implied that Fatah was prostituting itself to Israel. After receiving heavy criticism, he removed the cartoon from his Facebook page and posted another in which a second Palestinian woman has intervened and stabbed the Israeli man to death, vowing to “avenge my children and avenge you, O [Palestinian] Authority of shame!”

Even in the Gaza Strip, where Yassin lives, local ruling authority Hamas had threatened legal action against him for “offending our people, their resistance and their struggle.” Although Hamas never followed through on that threat, three citizens in the Fatah-ruled West Bank filed suit against him, which led to the arrest warrant.

For the time being, as long as Yassin stays out of the West Bank he will not be subject to the Palestinian Authority’s warrant. Nevertheless, the threat of arrest for drawings is yet another reminder of the free speech constraints faced by cartoonists around the world.