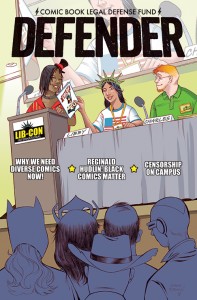 Why are comics about diversity or by diverse creators so frequently banned and challenged? CBLDF investigates in the latest issue of CBLDF Defender, out April 6, 2016. Retailers, FOC is today, so now’s the time to stock up on this issue! Boasting a cover by the inimitable Jimmie Robinson (Five Weapons, Bomb Queen), this issue also includes an interview with Reginald Hudlin (Django Unchained, Milestone Media) about the future of Black comics and all the latest news from CBLDF.

Each issue of CBLDF Defender brings engaging creator interviews, detailed analysis of current censorship news, and in-depth features that tell the story of the people fighting for the freedom to read! CBLDF Defender is made available free to individuals at comic book stores and other venues across the country, who can order the publication in bundles of 50 for $9.99 each from Diamond Previews (JAN161307). Interested parties may also subscribe directly by mail here. CBLDF Defender #5 is set to be in stores April 6, 2016!