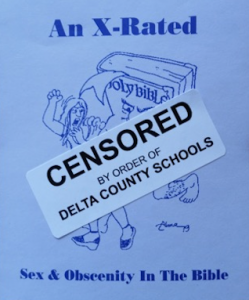 Another school district has painted itself into a corner regarding distribution of religious materials in schools. This time, it’s Colorado’s Delta County School District, which recently allowed passive distribution of Bibles in both middle and high schools, but restricted two atheist pamphlets to the high school only. The district cited the cover images — a cartoon and a 16th century engraving of Adam and Eve — as its justification for banning the Freedom From Religion Foundation’s pamphlets from the middle school.

The rural school district routinely allows community organizations such as 4-H and Scouts to leave pamphlets and other literature which students may pick up from tables in each school’s library. Until recently, the only religious organization using the distribution system was Gideons International, which left Bibles for students to pick up if they so chose. This system would be constitutionally sound, of course, as long as students did not feel pressured by the school to take a Bible and all other religious organizations were allowed to distribute their own literature.

But such was not the case. Because of the high school literature table’s placement near the entrance to the library, some students reported that they did feel pressured to take a Bible and thus avoid drawing attention to themselves. Last month, a parent contacted the Western Colorado Atheists and Freethinkers about the issue, and the group attempted to distribute its own literature but was denied. WCAF then called on the national Freedom From Religion Foundation, which has fought similar battles in school districts across the country. Backed up by a letter reminding the school district of its constitutional obligations, FFRF gained permission to distribute several of its own publications, as well as WCAF’s pamphlet and the notorious Satanic Children’s Big Book of Activities from the Satanic Temple.

Although this last publication has been the focus in previous cases, such as Orange County Public Schools in Florida, the Colorado district objected most strongly to two of FFRF’s own pamphlets, An X-Rated Book: Sex & Obscenity in the Bible and What Does the Bible Say About Abortion? The interior text of both is largely composed of verbatim quotes from the Bible, but Delta officials claimed that the cover images made them unsuitable for distribution in the middle school and possibly the high school as well. FFRF Staff Attorney Andrew Seidel dismissed out of hand the contention that the engraving reproduced on the abortion pamphlet is a “pornographic picture,” explaining:

Albrecht Dürer’s famous depiction of Adam and Eve in Paradise can be called many things, but it is not pornography. Dürer completed this engraving in 1504, and it is one of the most technically precise woodcuttings in all of art history. It has been displayed in the world’s foremost museums and is a staple of most art history classes. The idea that this picture is somehow pornographic is, to be frank, absurd.

As for the cartoon on the cover of An X-Rated Book, FFRF proudly covered it with stickers proclaiming “censored by order of Delta County Schools.” As the organization itself pointed out, this will no doubt serve to increase students’ interest in the pamphlet rather than deter them. (Not to mention the sticker actually makes the cartoon more suggestive, as it’s now impossible to see exactly what is happening behind there.)

Facing a predictable backlash for allowing the distribution of the FFRF and Satanic Temple materials, Delta school officials reportedly are now considering changing the policy to bar all religious materials from outside groups. That would suit FFRF just fine, said Seidel, pointing out that the district could have simply avoided the issue in the first place:

The school has no ability to censor any materials based on their viewpoint once it opens a forum. That is why open forums in public schools are such a bad idea. If you want to open a forum, you do not get to determine what is acceptable and not.