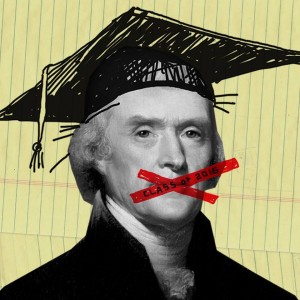 Every April the Virginia-based Thomas Jefferson Center for the Protection of Free Expression bestows its Muzzle Awards, dishonoring “those individuals and institutions responsible for the more egregious or ridiculous affronts to free speech during the preceding year.” In a departure from past years, the Center announced yesterday that the 2016 Muzzles went to 50 colleges and universities grouped into five broad categories of offenses against free expression.

In its introduction to the list, the Jefferson Center hearkened back to the Free Speech Movement, which spread from the University of California-Berkeley to other campuses across the country in the 1960s. Students who demonstrated on issues ranging from the Vietnam War to Civil Rights understood “that intellectual inquiry requires an environment in which debate is uninhibited, robust, and wide-open, even if it occasionally results in unpleasant or offensive exchanges.”

In recent years, though, the Jefferson Center fears that the tide has turned:

Students who once protested to have their voices heard now seek to silence those they disagree with or find threatening. Meanwhile, university administrators appear locked in a competition to determine which school will take the toughest stand against offensive, unpopular, and hurtful speech. First Amendment principles have given way to identity politics, trigger warnings, and so-called “safe spaces,” and the Free Speech Movement has, at many colleges, become the Anti-Speech Movement.

The 2016 Muzzles are divided into the following categories, with a few key examples from each. Check out the Muzzles website for more in-depth analysis and links to coverage of campus censorship around the country.

Introduction to Irony: Censorship by Students

Censorship in the Classroom: Threats to Academic Freedom

Seminar in Ideological Gerrymandering: Censorship of Outside Speakers

The Jefferson Center notes that speakers were targeted for censorship across the political spectrum, and each case “served to diminish free speech principles on their respective campuses.” Targeted speakers included: