Pride Month may be coming to an end, but you can keep the celebration going all year with these groundbreaking LGBTQ creators! 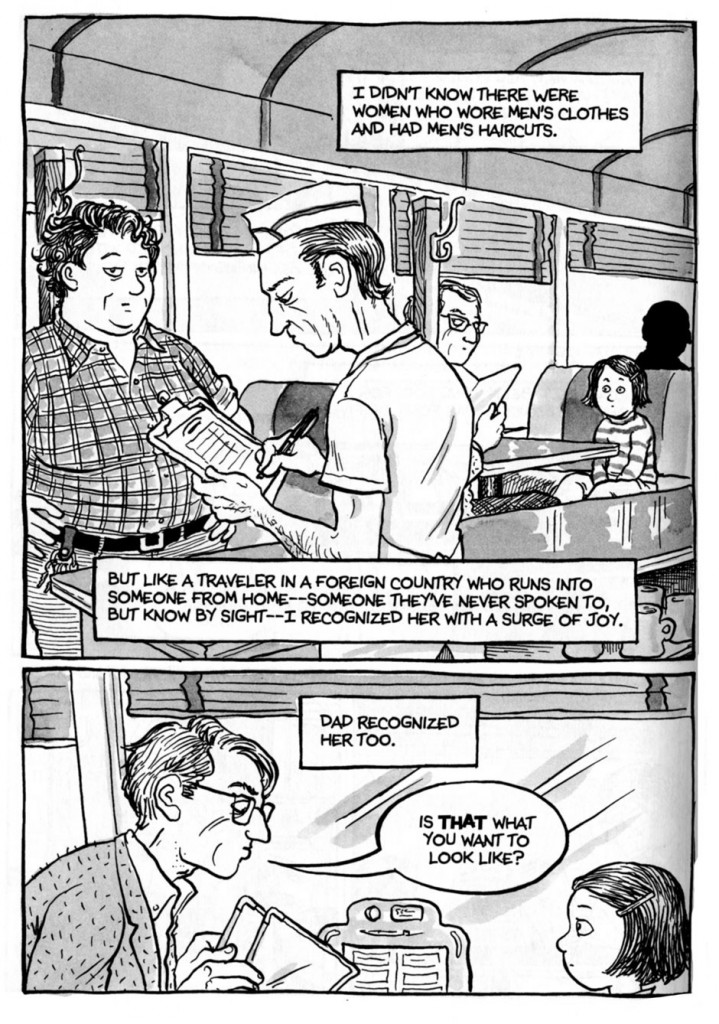 From her legendary alt-weekly strip Dykes to Watch Out For to a blockbuster Broadway musical and a MacArthur Genius Grant, Alison Bechdel has transformed all comics and brought LGBTQ stories into the mainstream. Fun Home, a memoir of her complicated relationship with her father, received universal critical praise and has made its way into the post-secondary canon — where it also became a frequent target of would-be censors. 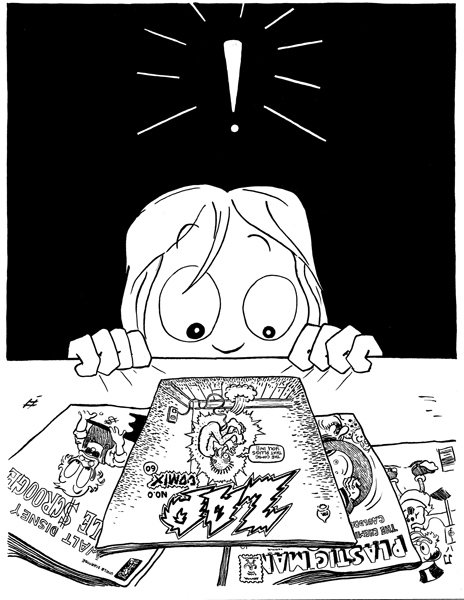 Before Ariel Schrag had even finished high school, she had already published three volumes of her High School Comic Chronicles series. Her ambitious and confessional work has been widely praised, drawing comparisons to notables such as Alison Bechdel, Judy Blume, and R. Crumb. Her work honestly confronts coming of age, sexual awakening, and sexual identity, often with sharp and mesmerizing humor. She edited and contributed to the anthology Stuck in the Middle, which has been challenged in several schools for its authentic and diverse depiction of the middle school experience. 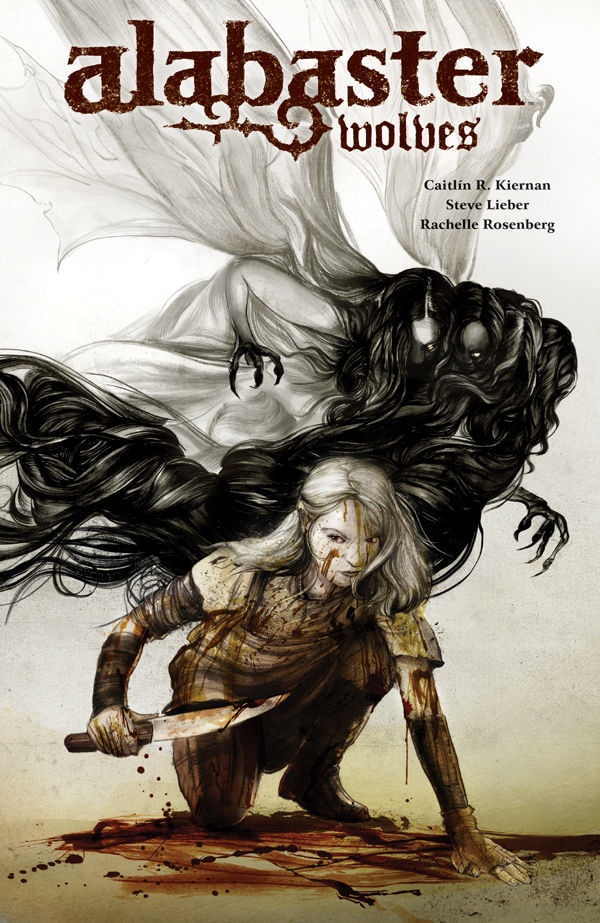 Caitlin Kiernan got her start in academia — paleontology, to be exact — before she took up fiction writing in the 1990s. In addition to gothic-influenced prose novels and short stories, she wrote the Sandman spinoff series The Dreaming from 1996 to 2001. More recently she has scripted the comic series Alabaster, centered on demon hunter Dancy Flammarion who first appeared in her prose fiction 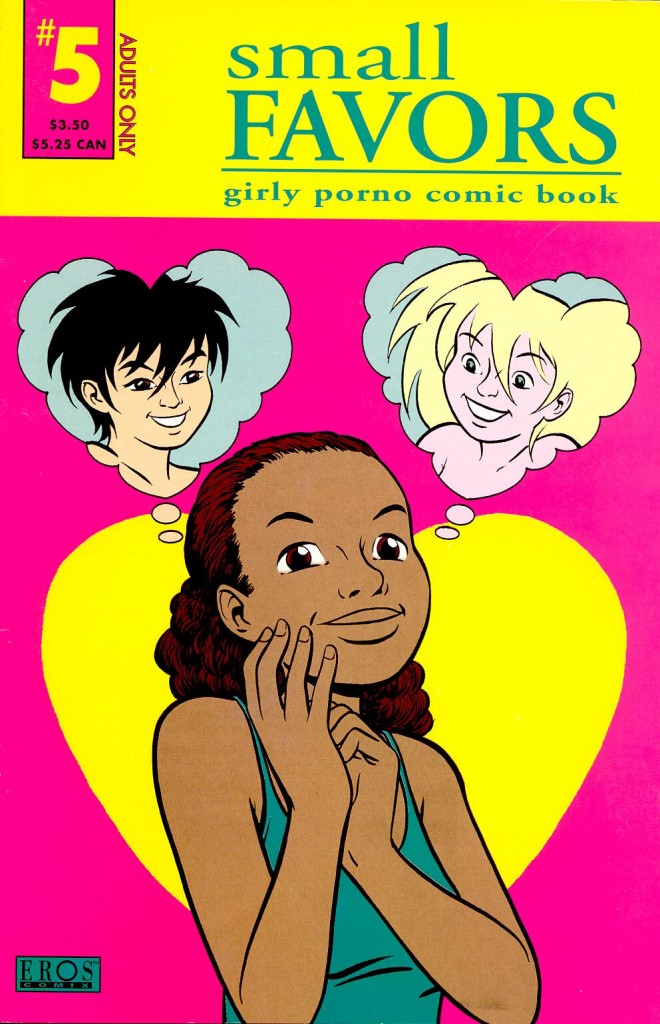 Collen Coover’s Small Favors, originally published from 2000-2003, blends lesbian erotica with a 1950s romance comic sensibility. Although it’s out of print, a collected edition will soon be released by Top Shelf Comix, which describes it as “one of the most endearing and delightful works of pornography ever put to the comics page.” Coover’s current work includes the Eisner-winning YA series Bandette, about a masked teen superthief. 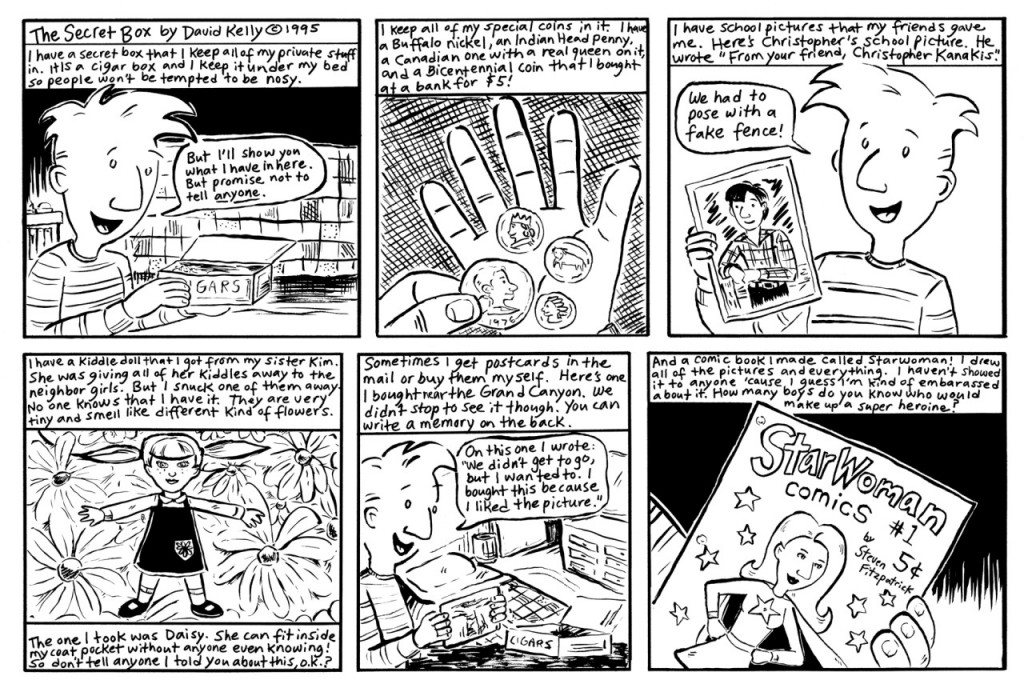 David Kelly’s strip Steven’s Comics originally ran in alt-weeklies from 1995-1998, telling a 1970s coming-of-age story of a boy who doesn’t fit traditional gender roles and deals with constant bullying by dreaming up a comic superheroine, Starwoman. The collected edition from Northwest Press includes a foreword by Dan Savage, and part of every sale is donated to the It Gets Better Project. 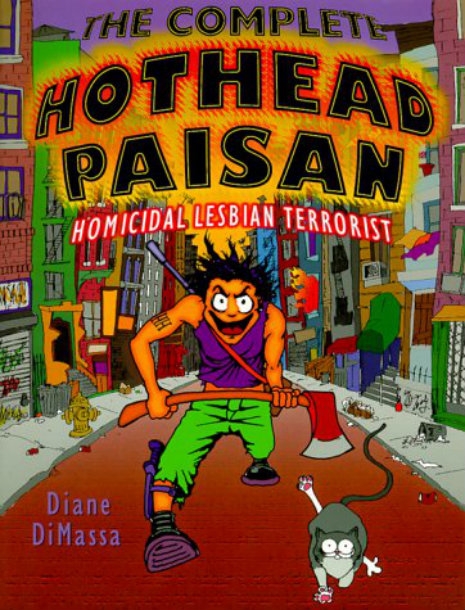 Diane DiMassa’s revenge fantasy Hothead Paisan: Homicidal Lesbian Terrorist began as a zine in the 1990s and collected in a 428-page complete edition in 1999. One reviewer describes the titular protagonist of this polarizing, gleefully violent work as “an unapologetically homicidal lesbian out to destroy homophobes, racists, and men who abuse women.” 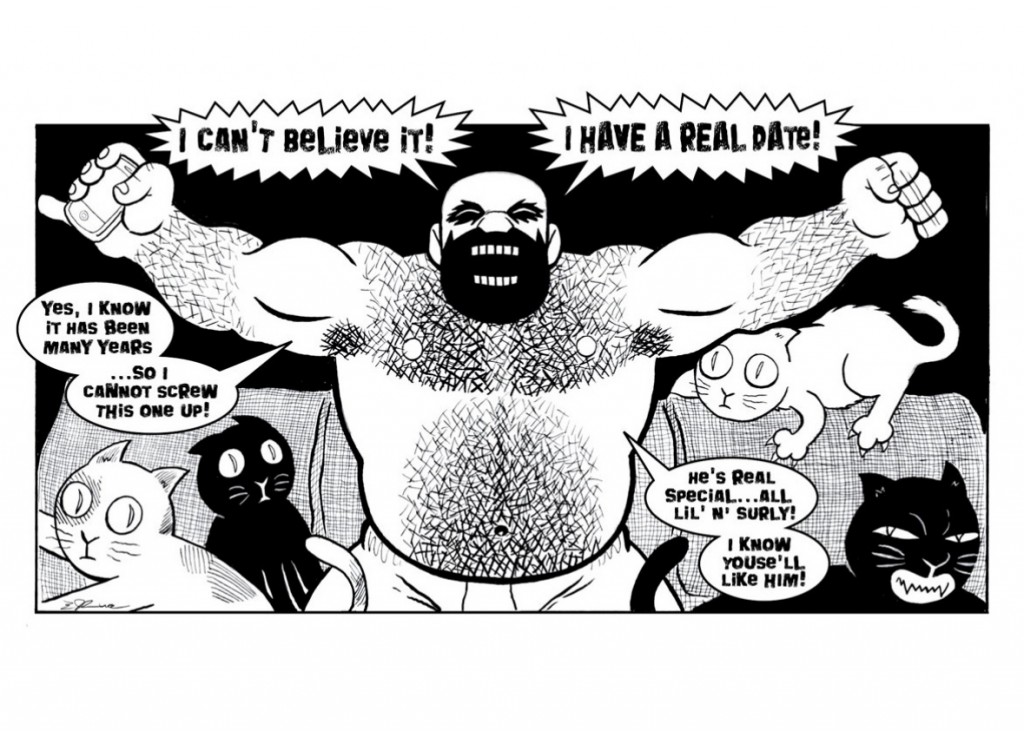 Ed Luce describes his character Wuvable Oaf as “my valentine to San Francisco’s Bear community.” Through a series of five full-length comics and several minicomics, the hirsute Oaf marshals his legion of rescue cats and awkwardly romances the lead singer of “the black metal/queercore/progressive disco grindcore band Ejaculoid.” The “Oafiverse” is still expanding, but a collected edition was published by Fantagraphics last year. 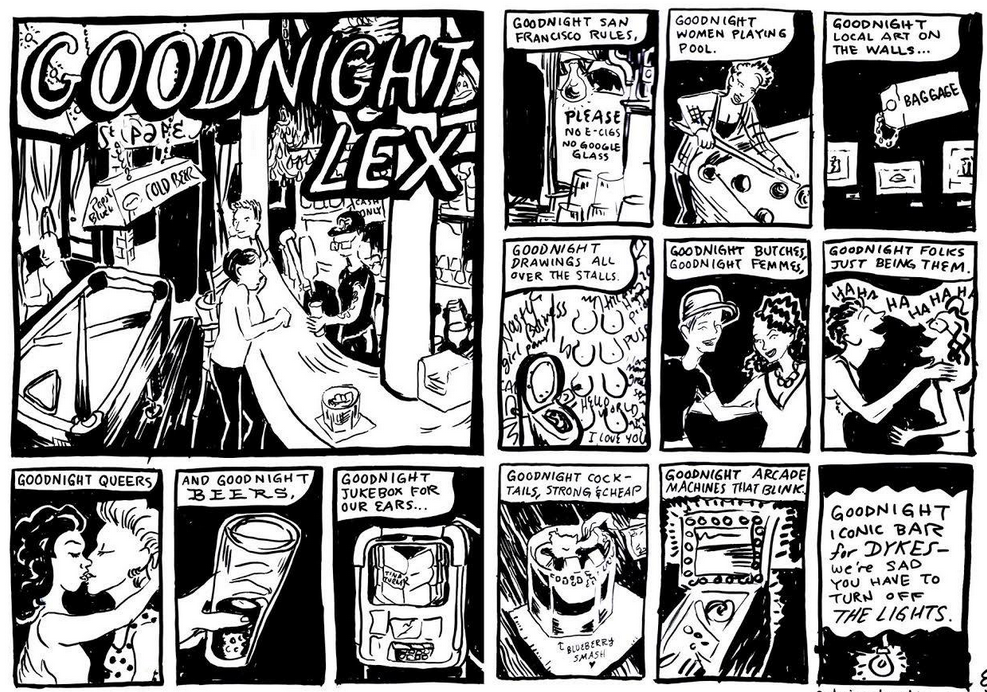 In her ongoing series Bisexual Trials and Errors, Elizabeth Beier chronicles both her current dating life in the Bay Area and the formative years when she grappled with “romantic identities, quirks, fears and desires.” She was recently awarded Prism Comics’ 2016 Queer Press Grant. 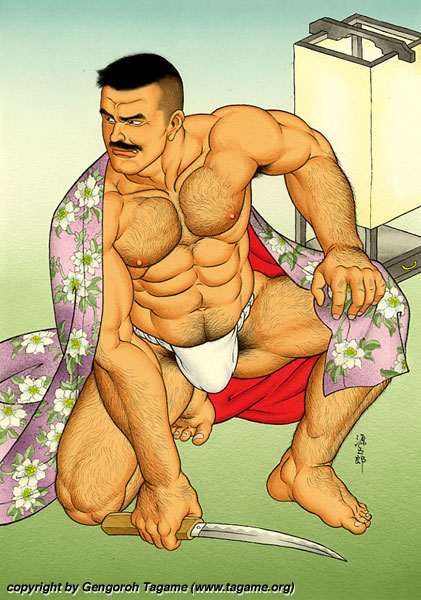 Gengoroh Tagame is an undisputed master of modern Japanese bara, or Men’s Love, manga. In many ways, Tagame helped introduce to the Western world to this subgenre of Japanese erotica, and his artwork focuses on the virility and power of the masculine physique, depicting bearish men with an urge to dominate. More than a creator, though, in recent years he has also taken on the unique task of documenting the untold history of Japanese gay erotica. But little of his work has been translated to English. In 2013, PictureBox released The Passion of Gengoroh Tagame, marking the first time a volume of bara manga had been released in the United States. 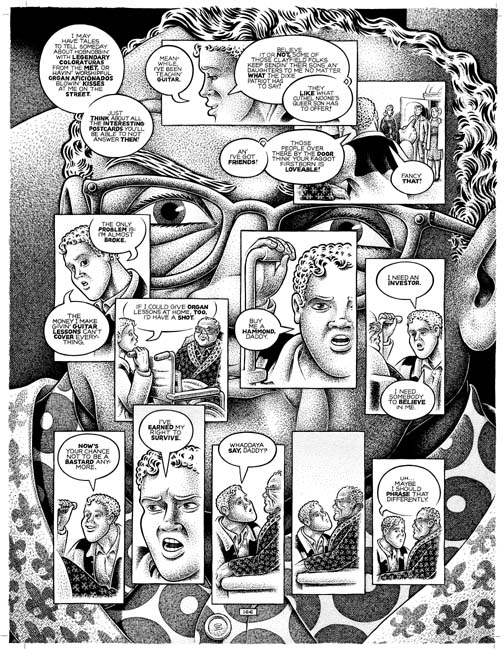 A veteran of the underground comix movement, Cruse is a true pioneer in creating LGBTQ comics. Cruse founded the groundbreaking underground series Gay Comix, editing the first four issues. Like most groundbreaking creators and works, though, his highly acclaimed and award-winning graphic novel Stuck Rubber Baby has incited controversy and attracted the attention of censors. The book explores issues of homophobia, racism and gay identity in a time period where all of those concerns were undergoing profound and revolutionary changes. It was among several LGBTQ themed books attacked in a Texas school library. 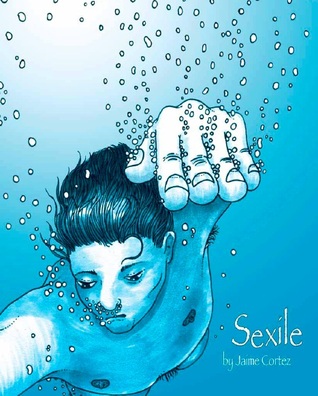 Best known for his comic Sexile, done for the Insititue for Gay Men’s Health and the AIDS Project Los Angeles, Jaime Cortez is a multi-media artist who uses his art to tackle issues that impact those who are part of the LGBTQ community. From the tale of a transgender Cuban immigrant, to recounting his own personal experiences growing up as a gay, Latino male, Cortez has dedicated his craft to expressing the many voices of the LGBTQ community. 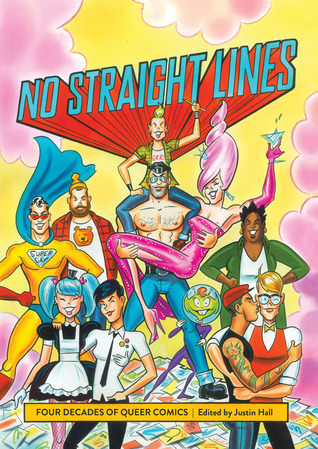 Justin Hall has been celebrated both within and outside the LGBTQ community since the publication of his award-winning anthology No Straight Lines, which highlights the works of LBGTQ comics creators from the past four decades and spotlights the truly unique and multifaceted nature of LGBTQ cartooning. Hall has also been the focus of a recent censorship debate with Apple after his recent book Hard to Swallow was rejected from the iBookstore for “objectionable content.” 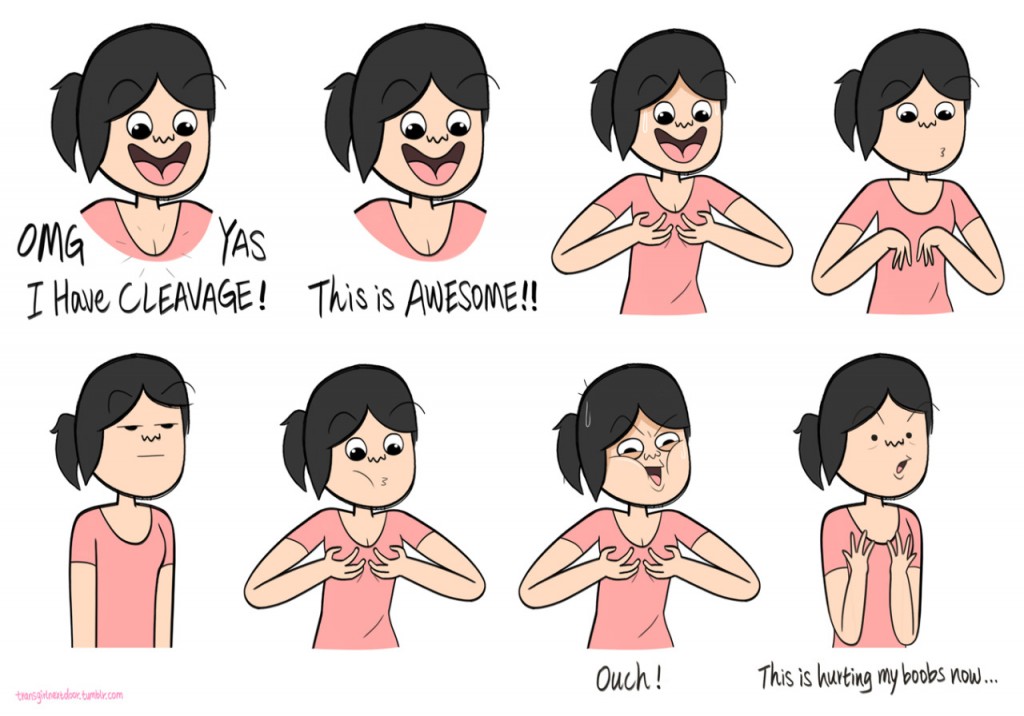 Creator of the popular web comic Trans Girl Next Door, Kylie Wu has gained national attention for her relatable depictions of trans youths and the unique day-to-day aspects of their lives. A true star of the web comics community, through humor and honesty Wu stands strong as a voice for a new generation of young LGBTQ 20-somethings still finding their identity. 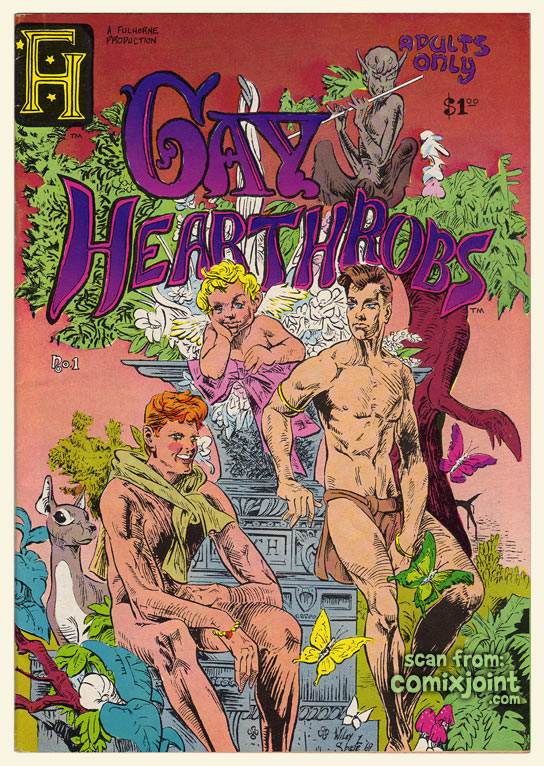 The publisher of the first all-gay adult comix, Gay Hearthrobs, with his keen business sense and eye towards change, Larry Fuller not only revolutionized the comics industry as one of the first and most successful Black comics creators, but also pushed the narrative boundaries of comics themselves. Fuller’s significant contributions to comics helped pave the way for both Black and gay aspiring creators. 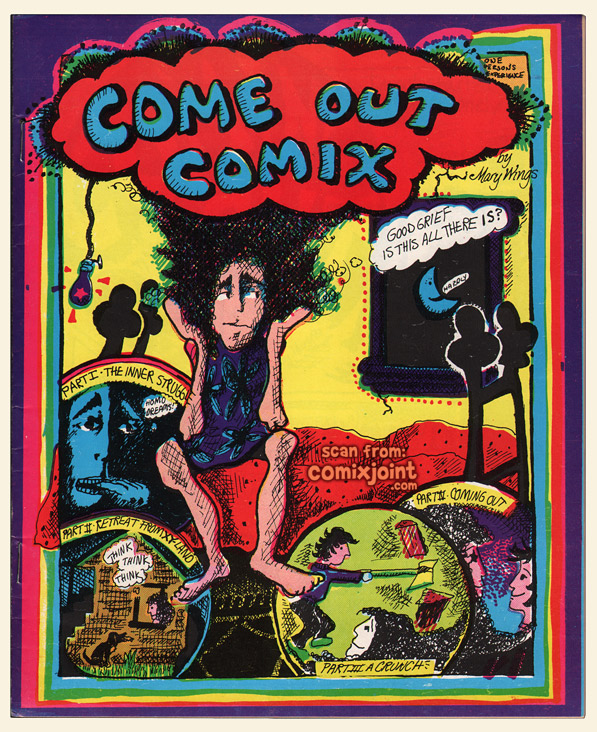 In 1973, with the publication of Come Out Comix, Mary Wings made history. The autobiographical account of Mary’s own story coming out as a lesbian, the groundbreaking underground comic cemented Wings’ place in comics history as one of the first LGBTQ creators to openly tell their story and paved the way for numerous other LGBTQ youths to find their voice through comics. 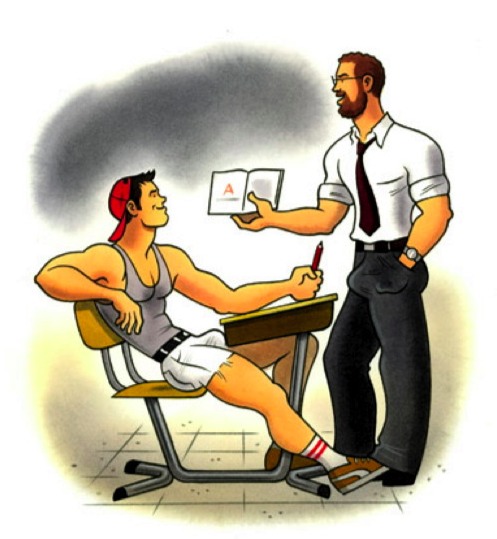 Canadian artist Maurice Vellekoop is known for colorful illustrations, many of which have appeared in major magazine publications like Time, GQ, and Vogue, and his Tom of Finland-inspired homoerotic sendups of children’s primers, ABC Book and Pin-Ups. Vellekoop has contributed short autobiographical comics to various anthologies, and is working on a memoir called I’m So Glad We Had This Time Together to be released by Pantheon Books. 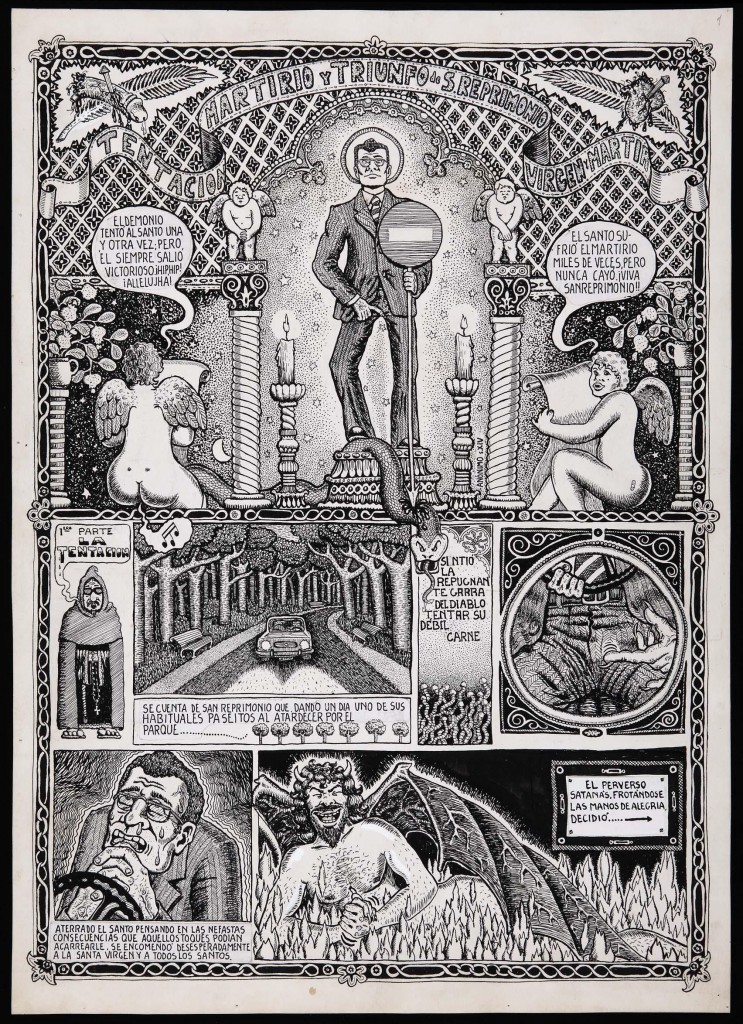 Nazario Luque Vera, who signed his artwork simply Nazario, founded the art collective El Rrollo in Barcelona, Spain, in 1971 and is known by many as the father of the Spanish underground comix movement. His frequent depiction of sex and nudity and ridicule of Spanish sexual morality often meant he had problems with censors. In 1975, he published “La Visita,” his first LGBTQ story, and he contributed stories featuring openly gay characters to publications throughout Europe. In 2007, Nazario’s last comics work, Alí Babá y los 40 maricones (Ali Baba and the 40 Fags), raised controversy in Spain when it was listed among the Ministry of Education’s resources for explaining homosexuality to children.

Robert Kirby’s Curbside ran in alternative and gay publications between 1991 and 2008. Openly gay, Kirby’s work focuses on LGBTQ characters, which he also explored in his zines Strange Looking Exile and Boy Trouble. In 2002, Vermont State Representative Nancy Sheltra attacked a LGBTQ newspaper called Out In The Mountains because it included one of Kirby’s cartoons. In the cartoon, two male characters kiss, prompting Sheltra to label it pornography. 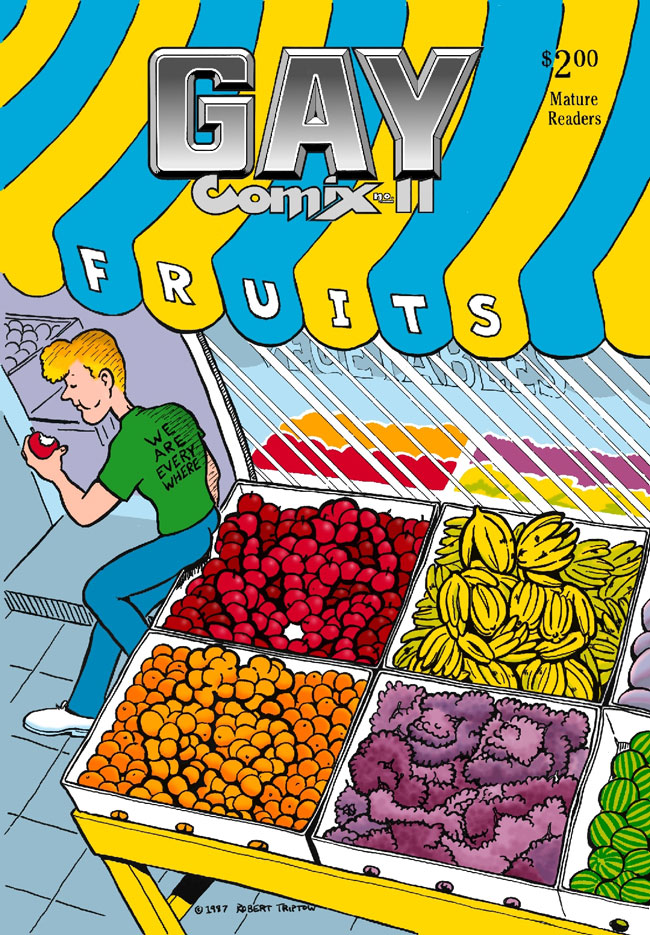 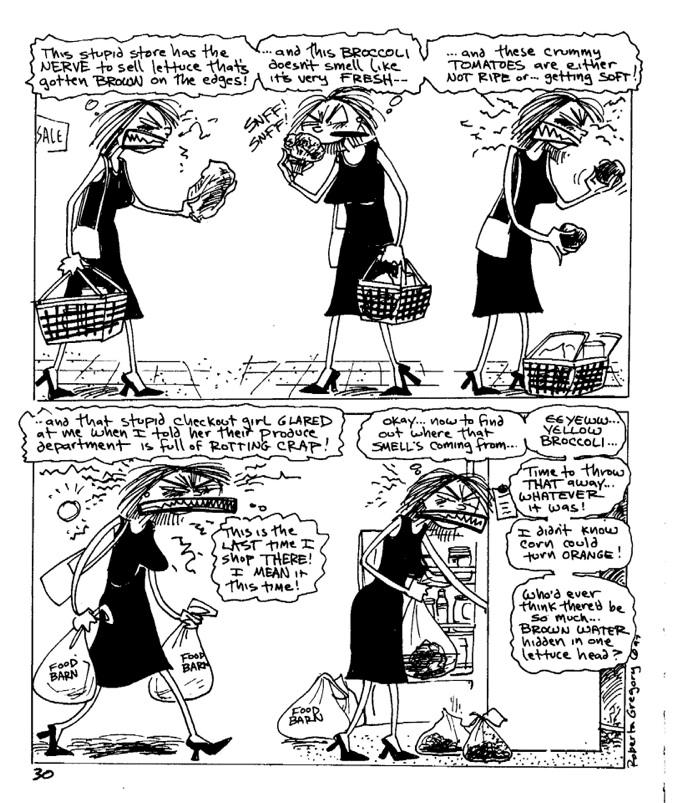 Roberta Gregory began working in the space between the feminist movement and the underground comix movement. One of her earliest creations was Dynamite Damsels, which was loosely based on her own life and featured lesbian themes. A regular contributor to Wimmen’s Comix, the seminal all-women underground series, Gregory also contributed frequently to Gay Comix. Gregory is best known for her character Bitchy Bitch, a short-tempered profanity-spewing middle-aged everywoman who doesn’t hold back when it comes to voicing her frustrations with modern life. 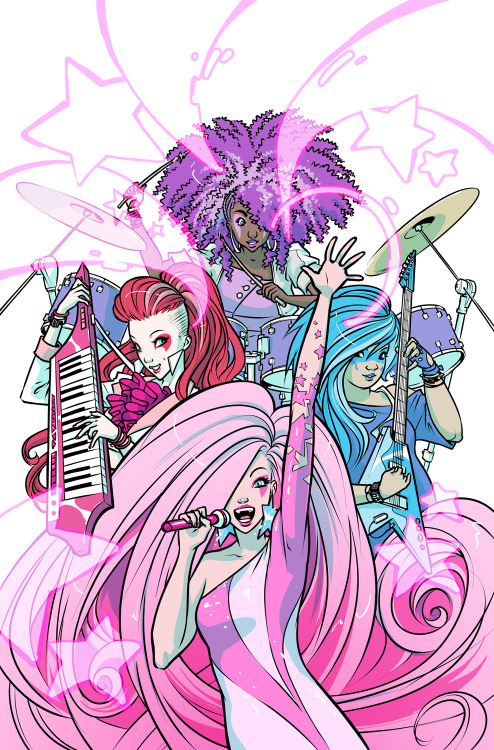 Many people know Sophie Campbell for her truly outrageous artwork on IDW’s hit revival of Jem and the Holograms, which gave the much-loved characters more diverse body types and a more LGBTQ-friendly vibe than the original cartoon. Before Jem, Campbell published the highly praised indie comics Wet Moon and Shadoweyes under her birth name Ross.

Tim Barela began creating comics in the 1970s, becoming a regular contributor to Gay Comix. His best known creation, Leonard & Larry, first appeared in a 1984 issue of the series. As the strip and its gay main characters gained traction, it was eventually featured groundbreaking LGBTQ magazines The Advocate and Frontiers. 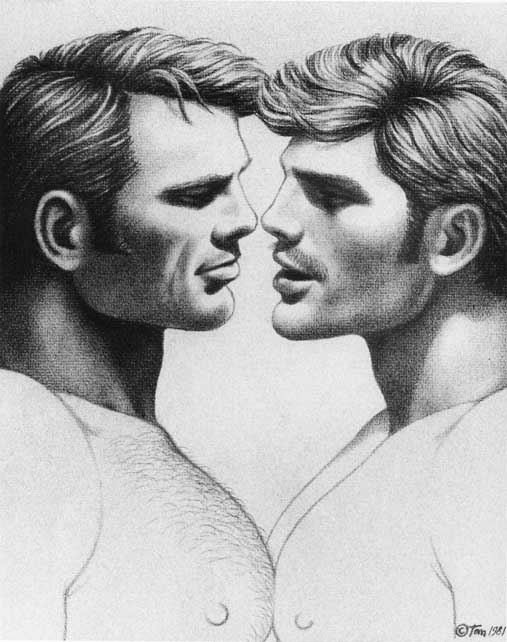 To call Tom of Finland’s art instantly recognizable is an understatement. The Finnish artist, born Touko Valio Laaksonen in 1920, specialized in highly stylized homoerotic art. To circumvent U.S. censorship codes in the 1950s and 1960s, Laaksonen specialized in the beefcake genre, publications for gay men that skirted regulators by depicting athletic young men dedicated to physical fitness and health. As male nudity was decriminalized, Laaksonen’s style of homoerotic art became more prevalent and more in demand – while publishing erotic books, Laaksonen also found space in mainstream art exhibitions around the world. Laaksonen eventually co-founded the Tom of Finland Company and Foundation, that latter of which works to preserve and exhibit homoerotic art to this day. Laaksonen passed away in November 1991. 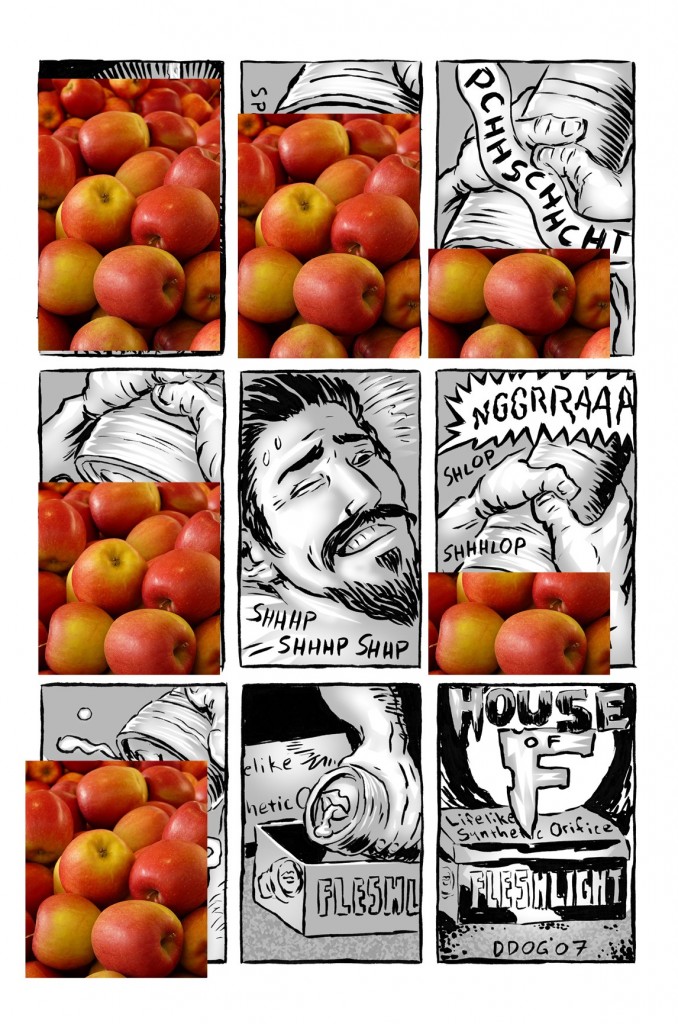 Founded by LGBTQ comics writer and activist Charles “Zan” Christensen, Northwest Press is dedicated to publishing “the best lesbian, gay, bisexual and transgender comics collections and graphic novels and celebrating the LGBT comics community.” Recently, Apple’s iBookstore rejected all three of Northwest’s most recent offerings due “prohibited explicit or objectionable content” (and this isn’t the first time they’ve had trouble with Apple’s content policies). So, Christensen got creative: He resubmitted the work with custom apple-themed censor bars.

All images (c) their respective creators.