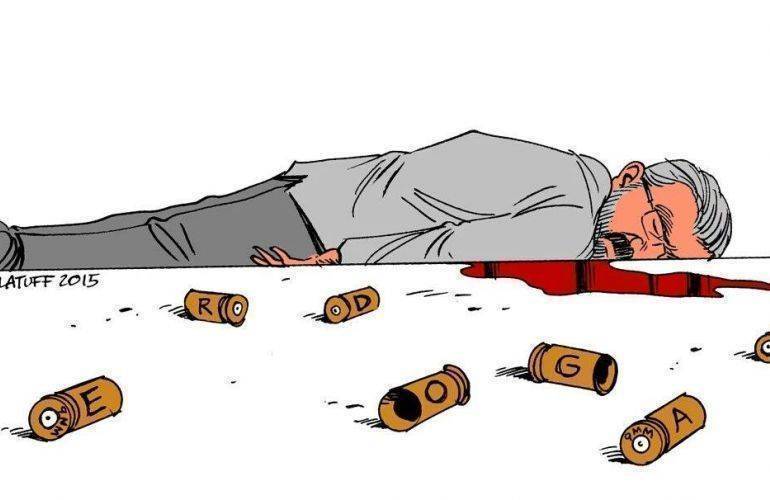 In just the latest in a string of media clampdowns in Turkey, last week a reporter for Dicle News Agency was detained and questioned at a police checkpoint and for allegedly insulting President Recep Tayyip Erdoğan with a cartoon shared on social media. Özgür Paksoy was allowed to leave after questioning, but could still face charges.

Paksoy’s employer is sympathetic to Kurdish rebels fighting against the Turkish government. The cartoon that he allegedly shared on an unnamed social media platform is by Carlos Latuff and suggests that Erdoğan was linked to last year’s fatal shooting of Tahir Elçi, a prominent pro-Kurdish lawyer and rights activist. Elçi was killed just after making a public press statement “calling for an end to violence between the Turkish state and the Kurdish rebel group.”

The gunmen who killed Elçi and two police officers still have not been identified, but many pro-Kurdish activists believe they acted on behalf of Erdoğan. In the Latuff cartoon, Elçi is shown lying in a pool of blood while the shell casings around him spell out the president’s name. Latuff’s website is banned in Turkey, although the Brazilian with a keen interest in Turkish politics recently managed to publish a book there.

The detention and questioning of Paksoy is only the latest in the Turkish government’s string of increasingly ominous crackdowns on free expression within the country and even abroad. In just the past few months, authorities have sentenced two journalists to two years in prison for reprinting a Charlie Hebdo cover, prosecuted a Turkish comedian for a satirical tweet, seized control of the opposition newspaper Zaman, arrested a Dutch journalist working in Turkey after she called Erdoğan a “megalomaniac dictator,” and pushed for Germany to prosecute a comedian within its own borders after he read an off-color poem about Erdoğan on a TV sketch show.