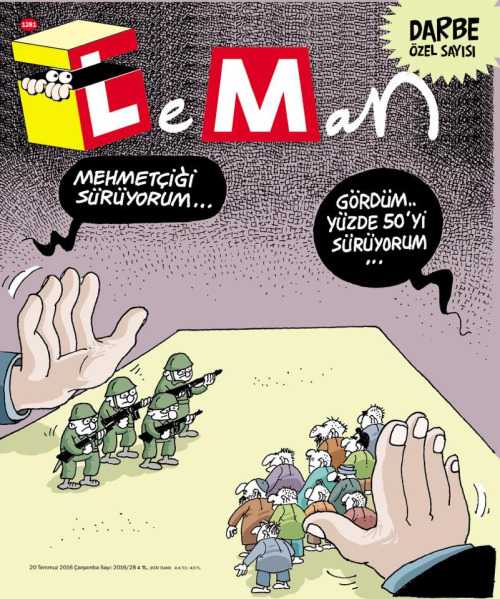 The already dire situation for freedom of expression and other basic human rights in Turkey has sharply worsened since last week’s failed military coup against President Recep Tayyip Erdoğan’s government. In just the past few days, 10,000 people have been arrested on spurious charges, nearly 60,000 civil service workers and all public university deans have lost their jobs, and all professors have been banned from traveling or working abroad.

Unsurprisingly based on Erdoğan’s past record, the crackdown has also deeply affected the press: 34 journalists had their credentials revoked, and the satirical magazine Leman was yesterday prevented from printing a special post-coup edition with a cover cartoon suggesting that the government deliberately pitted civilians against the military plotters. Middle East comics scholar Jonathan Guyer explicates the cover on his blog Oum Cartoon:

‘I bet on the soldiers,’ says the man who pushes the timid military men toward confrontation. Another man in a suit edges a handful of angry citizens toward the uniformed pawns, saying, ‘Good, then I’ll put my 50 percent on the people.’ That’s a reference to Erdogan’s remark during the 2013 Gezi protests, in which he cited [his own] AK Party’s electoral mandate (50 percent in the 2011 balloting) amid street demonstrations against his authoritarian policies.

When the attempted coup was launched by a minority of military members last week, every group politically opposed to Erdoğan quickly disavowed any involvement, citing respect for the democratic process that put him in office two years ago even if they disagree with his subsequent actions. External analysts and media still have not been able to discern exactly who orchestrated the attempt, but the president blames followers of Fethullah Gülen, a cleric and former Erdoğan ally who now lives in exile in Pennsylvania. The Gulenists have long been favored scapegoats of the government, being cited for example in the state takeover of the Feza Media Group in March. Leman editors also suggested via Twitter that the censorship of their latest issue may be due to their previous coverage of Gülen.

Regardless of who may have directed the coup, Erdoğan did not hesitate last week to urge his civilian followers out into the street to face down the military members who were attempting to carry it out. They succeeded, but not without a heavy toll: at least 265 people dead and 1541 wounded on both sides. Leman’s censored cover suggests that the bloodshed all resulted from a sham orchestrated by the government itself–a real possibility, given the swift crackdown on basic rights that followed.