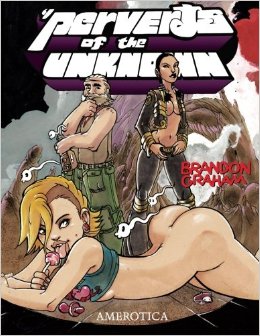 Under a headline claiming that the comic “raises eyebrows,” the New Zealand Herald illustrated its story with an excerpt that is almost completely obscured by shocked-looking emojis. In phrasing more reminiscent of U.S. local news than a respected national newspaper, the article also notes that “the Herald cannot print the content of the comic, even though the comic can be displayed on the shelves of the public library.” Three branches of Auckland’s public library system hold copies of Perverts of the Unknown in their adult graphic novel sections.

Out of all the sources solicited for comment in the story, only one, Auckland city council representative Ross Clow, said the book should not be in “any unsupervised section of our libraries.” Clow’s fellow councillor Linda Cooper, by contrast, said she was a bit surprised by the book’s content but acknowledged that “it’s not illegal, it’s not in the children’s section and if you don’t like it then don’t go looking for it.”

In addition to Cooper, every other source quoted in the Herald story is supportive of adults’ freedom to choose what they read, led by Auckland Libraries general manager Mirla Edmundson:

We would really defend the right of people to read whatever it is they wish to read. The difference with graphic novels is that they are by their nature visual. With a graphic novel, there isn’t a lot of time between seeing the image and understanding the content.

I’m delighted it is in the library’s collection because it’s a significant part of what’s happening in comics at the moment. Graphic novels are always vulnerable to moral panics around these books because people find pictures much more confronting than text.

Apparently since the Herald article originally appeared last week, two of the library system’s three copies of Perverts have gone missing. The remaining copy is checked out until September 19 and has amassed a waiting list of 22 borrowers. The book may have raised some eyebrows at the New Zealand Herald, but it seems that plenty of Aucklanders want to see it for themselves!