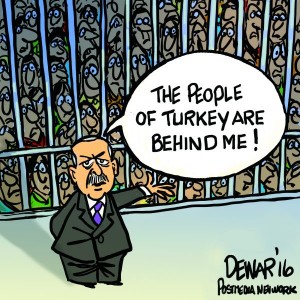 After five days in detention, Turkish cartoonist Musa Kart and eight of his colleagues at Cumhuriyet newspaper were formally arrested and charged with supporting Kurdish militants and the Gulenist movement on Saturday. They are expected to remain in jail until their trial at an undetermined date.

More than a dozen Cumhuriyet staff members were detained last week amid allegations that the paper provided support for organizers of the failed coup attempt in July. President Recep Tayyip Erdoğan has used the coup as cover for an increasing crackdown on media, academics, judges, and other public officials whose political views do not align with his own. Under the ongoing state of emergency still in force throughout the country, the detainees were also barred from meeting with their lawyers for five days.

Following news of the charges, hundreds of supporters attempted to march to the newspaper’s offices in Istanbul but were dispersed by police with teargas and water cannons. Previous media arrests and closures had mainly focussed on Kurdish outlets, but the secular Cumhuriyet is one of the largest and oldest mainstream papers in Turkey. The Guardian’s media analyst Peter Preston characterized the latest arrests as “a tipping point where democracy dies.” The paper’s remaining staff have resolutely continued to print new editions, and yesterday ran a blank panel with Kart’s name where his weekly cartoon should have been.

Political cartoonists from around the world are contributing their work to an awareness and support campaign organized by Cartooning for Peace. Meanwhile, an anonymous column at the English-language news site Hurriyet Daily News warned of dire things to come for Turkey: “Intellectuals live and produce for society, like the canary in the mine. When their voices are not heard, it means disaster is approaching…”