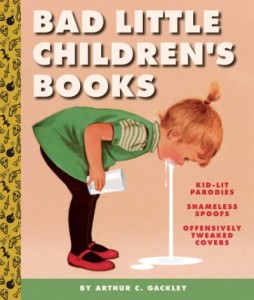 At the request of the book’s author, Abrams is canceling future printings of Bad Little Children’s Books following a Twitter-storm that took sections from the satirical book out of context, mischaracterizing the book as bigoted. Late last week, CBLDF signed a National Coalition Against Censorship-authored letter of support for the publisher and the book.

Bad Little Children’s Books collects illustrations parodying children’s book covers in the vein of MAD Magazine and The Onion, with the intent of skewering the close-minded and bigoted belief systems that would inspire the satirical titles. Reviews of the book have been positive since its September 2016 debut, with Huffington Post, The Washington Post, Boing Boing, Bust, and Print included among the positive press.

Despite being clearly presented as parody for adult audiences by the publisher and intended as an “equal opportunity offender” by the author, the book came under attack on Twitter after an online opinion article called the book racist. The article singled out a number of covers from the book, disregarding the work as whole and the satirical intent of the creator. Social media users demanded that Abrams pull the book and issue an apology, arguing that the book lent credence to the views it actually mocked and subverted.

In their letter of support, NCAC points out how parody and satire traditionally court controversy by revealing the foibles of society and personal belief:

Humor that employs satire and parody is often the subject of criticism and controversy. Some of the most significant comedians of the recent past — Lenny Bruce, Richard Pryor, Tom Lehrer, Trey Parker and Matt Stone, Sarah Silverman, Margaret Cho, and many others — have been vilified for doing precisely what this book does — make fun of social niceties, conventional wisdom, and sacred cows. At the same time, there are many who appreciate this type of humor, as evidenced by other readers’ reaction to the book, like one who wrote “So distasteful, it’s delicious. Hysterical.”

The author, who remains anonymous but works under the pen name Arthur C. Gackley, an Archie Bunker-esque character, described the motivation behind the title:

The artistic statement that I tried to make in the book is to offend and, by doing so, to shine the uncomfortable light of day on bigotry, prejudice, and hate; in effect, to refuse to let those pernicious and undermining sentiments stand. That’s been part of my life’s work and what I hoped to achieve with this book.

In their statement, NCAC supported Abrams’ right to publish the book — and the audience’s right to not buy the book if they were offended:

We support ABRAMS’ decision to publish this, or any other book, even if it offends some readers. We urge the company not to accede to pressure to withdraw the book, but to stand for the proposition that it is the right of authors to write as they choose and of individuals to decide for themselves what to read. After all, anyone who doesn’t like the book doesn’t have to buy it.

Unfortunately, in this case, the controversy was so great that the book’s author has elected not to have the nearly sold-out title reprinted. Because they are “faced with the misperceived message of the book,” Abrams has acceded to the author’s request despite being willing to continue to support it.

The answer to speech that some find offensive isn’t to stifle that speech but to respond in kind with more speech. While NCAC’s statement of support wasn’t enough to counter to the decision to stop publication of the book, the signatories stand behind the principle that Abrams — and other publishers in similar situations — has the right to publish the material under the First Amendment.

The statement of support for Abrams follows in full.

Statement in support of Bad Little Children’s Books (Abrams 2016) by betsy.gomez on Scribd