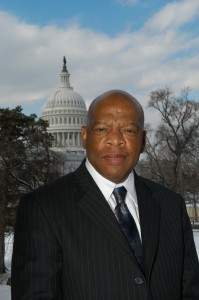 Hard on the heels of receiving the first-ever National Book Award for a comic, Congressman John Lewis will get yet another landmark honor in 2017: the Lifetime Achievement Award for Free Expression from the Newseum in Washington, D.C.

The annual Free Expression Awards recognize individuals who “have taken personal or professional risks in sharing critical information with the public, have been censored or punished by authorities or other groups for their work, or have pushed boundaries in artistic and media expression.”

Lewis’ biography on the awards website cites his organizing work with the Student Nonviolent Coordinating Committee during the Civil Rights Movement, his leadership of the Voter Education Project, and his role as co-creator of three-volume graphic novel March, which the museum notes “is used in schools across the country to teach students about the civil rights movement.”

Last month Lewis and March co-creators Anthony Aydin and Nate Powell made history with the first National Book Award bestowed on a graphic novel. The third volume of the memoir received the award for young people’s literature.

Lewis and the other Newseum honorees will receive their awards in a ceremony at the museum on April 8, 2017. Congratulations to Congressman Lewis for this well-deserved honor!