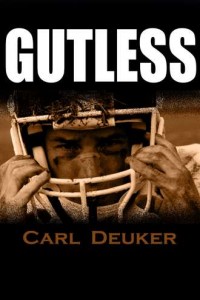 Some Florida high school students who were supposed to be celebrating literacy last month instead got an object lesson in censorship, as the Santa Rosa County school district cancelled an all-school read of Carl Deuker’s novel Gutless during the statewide Celebrate Literacy Week after some parents complained about passages they found inappropriate.

According to Director of High Schools Jason Weeks, the passages in question concerned “body parts and things like that that shouldn’t be being discussed.” The Florida Department of Education schedule for Celebrate Literacy Week shows that students and staff were to read and discuss the entire book during the week of Jan. 23-27, followed by a Skype session with Deuker on Feb. 1. Given the amount of preparation required for such a project, it would be unusual for school administrators to have no familiarity with the book beforehand. Nevertheless, Weeks claimed that the process for teachers to select instructional materials “had a gap in it and [we] will make sure it doesn’t happen again.”

Gutless is about a high school football player finding the courage to stand up for a friend who is the target of bullying. Publisher Houghton Mifflin Harcourt recommends it for ages 12 and up, as does Kirkus. The review from School Library Journal skews slightly younger, recommending the book for grades 6-10 and praising it as “a well-written offering that deals with coming-of-age, bullying, and exciting sports action; a touchdown for sports collections and reluctant readers.”

Contacted for comment by the Santa Rosa Press-Gazette, Deuker said:

In context, Gutless is moral to the core – maybe to the point of being too preachy. The characters that abuse power are, by the last page, revealed as moral cowards – despicable people. The main character learns through the course of the novel that developing the moral courage to stand up to evil is essential, far more important than physical courage on an athletic field. The teachers would have used the book to take on the topics of bullying and abuse of power.

A part of me does, I’ll admit, sympathize with parents. They want to keep their children young and innocent – fourth-graders for life. But Peter Pan and Wendy aren’t real. Their junior high ‘children’ are no longer children, but are now young adults. Reading Gutless would have been good for them.

While the book does not appear to have been pulled from schools altogether–a districtwide library search shows that two middle schools have several copies available, while all six copies belonging to high schools are currently checked out–it certainly was pulled from Jay High School’s curriculum. The removal may or may not have been in violation of the school board’s policy on challenged materials, depending on whether Gutless is considered to be “district-adopted instructional material” or “other instructional material.” According to the policy, only the former are guaranteed a full hearing before the school board when challenged; the latter (which may well include supplemental reading books like Gutless) apparently could be removed by a single teacher, librarian, or administrator if that person happens to agree with the complainant.