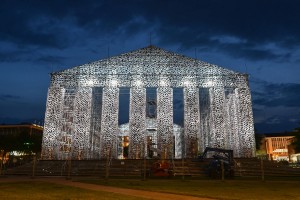 The centerpiece of a new art exhibit in Germany is a life-size replica of the Greek Parthenon made up entirely of banned books.

Part of the documenta 14 contemporary art exhibition, the piece was created by Argentine artist Marta Minujin to protest censorship and stands in Friedrichsplatz in Kassel, Germany — a location where Nazis burned books by Marxist and Jewish writers in 1933.

In all, 100,000 copies of 170 titles cover a metal grid that matches the dimensions of the Parthenon. Minujin narrowed the titles from a list of 70,000 books that had been banned since the Reformation nearly 500 years ago. Interestingly, while she included books like the Bible, Salmon Rushdie’s The Satanic Verses, The Adventures of Tom Sawyer, and The Little Prince, she didn’t include one of Germany’s most controversial books: Mein Kampf by Adolf Hitler. She also chose not to include overtly pornographic works. 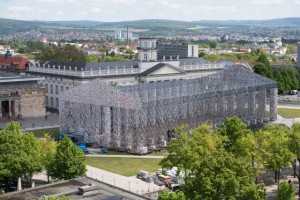 The exhibition will continue until September 16, and the books will be redistributed to the public after the piece is disassembled.