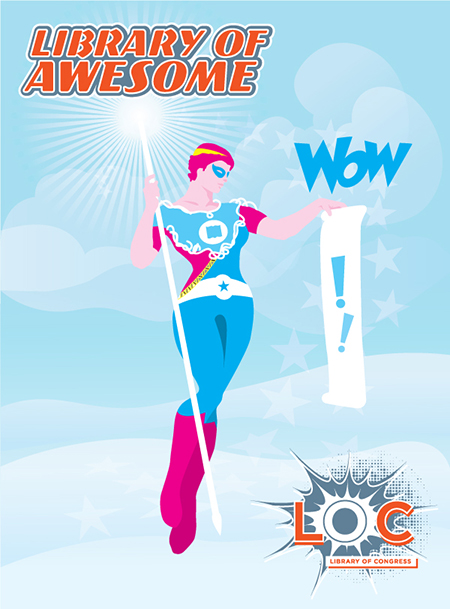 Comics old and new are in the spotlight this week at the Library of Congress! Today through Saturday, June 17, the nation’s library is showcasing comics from its collection in the pop-up exhibit Library of Awesome. On Friday, Librarian of Congress Carla Hayden will interview Lynda Carter in a public event that will also stream live on Facebook and Youtube. And to round out the week, the Library is looking to the future with a new digital archive of landmark webcomics.

The events coincide with Awesome Con, which runs Friday through Sunday in Washington, D.C. In addition to the exhibit and the Lynda Carter event, the Library is also hosting several family-friendly events around comics and fandom, including a cosplay demonstration and workshop tomorrow followed by a costume contest on Friday. On Saturday, several Library staff members will be at Awesome Con itself for a panel about the comics in their collection and the work that goes into preserving them.

The Library of Awesome exhibit, open to the public free of charge in the Library’s Jefferson Building, brings together more than 100 items from the largest comic collection in the world. Any aficionados who happen to be in the area will not want to miss out, judging by the press release:

Visitors will see famous editions of such comic-book characters as Wonder Woman, Superman and some of the most significant artwork and storylines in comic-book history. These include original artwork for the first appearance of Spider-Man and the American classic known as Famous Funnies No. 1 (1934), considered by many to be the first American comic book. First appearances of Batman, the Fantastic Four and the Incredible Hulk will be on display, as well as rare early science fiction and children’s comics. The exhibit will also feature first issues of Archie, Luke Cage: Hero for Hire and Supergirl.

Even better, visitors in superhero costume receive a 15% discount in the Library gift shop. (Note restrictions on masks and weapons, including replicas, at the bottom of the page here.)

Free tickets to see Lynda Carter in conversation with Carla Hayden on Friday have already been snapped up, but the event will also be livestreamed on the Library’s Facebook and YouTube pages starting at 2 p.m. ET.

Finally, the Library this week also announced its brand-new Webcomics Web Archive, which currently preserves about 40 webcomics dating back to the first XKCD from 2007. Aside from being a treasure trove for fans, the archive will also be a boon to librarians around the country and the world who have struggled to preserve access to webcomics in spite of platform migrations and dead links. Libraries of all types will also be able to integrate the item records for the webcomics directly into their own online catalogs, so that a search for Hark! A Vagrant, for instance, will turn up a direct link to the full archive.

The Library of Awesome exhibit can be found in room LJ 113 on the first floor of the Jefferson Building, 10 First Street S.E., Washington D.C. Most of the week’s other events will be in the Young Readers Center in LJ G29 of the same building, while the all-ages costume contest on Friday will be outside near the Neptune Fountain facing the Capitol.