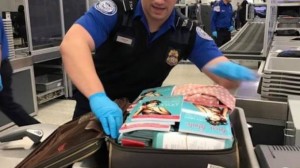 The Transportation Security Administration has ended tests of a new requirement for passengers to remove books and other paper items from their carry-on luggage during security screening. An agency spokeswoman left room for the new rules to return at a later date however, saying that “at this time, [we] are no longer testing or instituting these procedures.”

The TSA says that the pilot test simply ran its course, but the announcement came shortly after alarm bells were raised by intellectual freedom and privacy advocates in the past week. The agency said that the test arose only from scanning machines’ limitations in discerning explosives from other contents of packed bags, but even prior to the new rules there were many documented cases of TSA employees giving increased scrutiny to passengers perceived to be carrying suspicious reading material. After a blog post by ACLU’s Jay Stanley publicized the test, representatives from the American Association of University Professors and the Modern Language Association also voiced their concern.

In a press statement, the TSA said that it “understands privacy concerns and only inspects items to clear them of dangerous/prohibited items.” Separately in a public-facing blog post, the agency said that pilot tests had been conducted and subsequently ended at only two airports. It then made some curious attempts at humor in dismissing privacy concerns:

[O]ur adversaries seem to know every trick in the book when it comes to concealing dangerous items, and books have been used in the past to conceal prohibited items. We weren’t judging your books by their covers, just making sure nothing dangerous was inside.

In any case, the TSA says that as of today there is no systematic requirement for books to be scanned separately in any U.S. airport, nor does it currently have plans to implement any such procedure. Of course, this does not preclude agents from searching any bag that is flaggedon the scanner for possible weapons, explosives, or other prohibited items. The agency encourages travelers who do have privacy concerns during such a search to request private screening.