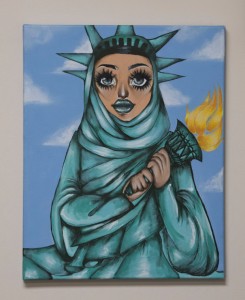 Following on the heels of a Congressional dispute over a St. Louis teen’s painting that included a police officer with a boar-like head, another painting that hangs in a district office of California Rep. Lou Correa has become a new target of social media outrage. The artwork, by a high school student who remains unidentified due to threats to her safety, depicts the Statue of Liberty wearing hijab. Local activists have demanded the painting’s removal, claiming that they would object equally to any other religious symbol displayed in an elected representative’s office.

Rep. Correa, whose Orange County district covers most of Anaheim along with parts of Orange and Santa Ana, promptly responded that the painting will stay and that the House Office of General Counsel advises there is no legal issue to justify its removal. The painting hangs in his Santa Ana office along with other runners-up from the 2017 Congressional Art Competition.

Mike McGetrick, a member of the Orange-based group We the People Rising which normally advocates for stricter immigration laws, last month sent Rep. Correa a letter alleging that “to attribute a specific religion to the Statue of Liberty is inaccurate, unprofessional and offensive.”

In fact, French sculptor Frédéric-Auguste Bartholdi originally intended for the statue that would become our own Lady Liberty to stand near the entrance to Egypt’s Suez Canal and depict a Muslim peasant woman. Egypt in the 1880s was not down for the massive financial investment required to install her there, and the rest is history. The student’s artwork also is far from the first to depict the statue wearing hijab; CBLDF’s 2016 member card with art by Craig Thompson is just one example among many.

Nevertheless McGetrick maintains that by defending the painting’s presence in his office, Rep. Correa is not meeting the standard of “right-down-the-line patriotic” that he expects from members of Congress. We the People Rising is tentatively planning a protest outside the Santa Ana office on September 11, as they have every right to do thanks to the First Amendment which also protects religious freedom.