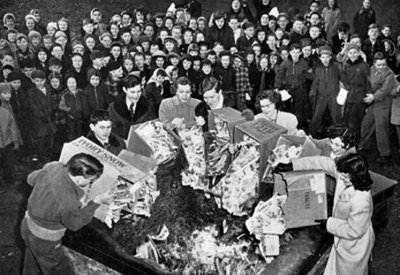 For as long as books have existed, people have been trying to burn them. Book burning is in the Bible, as some 19th century Los Angeles ministers pointed out in advocating a purge of the public library. In recent times, bonfires of books and other media from video games to Beatles records have been largely symbolic since the burners don’t intend to eradicate every copy in existence, but not so long ago that was indeed the goal. In a recent article for Smithsonian, Lorraine Boissoneault takes readers on a brief tour through the centuries-long history of book burning.

The earliest recorded book burnings were carried out by conquerors or invaders looking to replace local culture with their own version. That was the case with Chinese emperor Qin Shi Huang in 213 B.C., and with ancient Roman leaders looking to erase the memory of imported religious practices like the Greek Bacchanalia.

As books became cheaper and easier to obtain after the invention of the printing press in 1440, opposed factions in society took it upon themselves to burn each other’s books–although there were still plenty of burnings directed by government and religious officials as well. The most notorious book burnings of the 20th century took place across Nazi Germany on May 10, 1933, organized by university students seeking to eliminate all literature judged to exhibit “the Un-German Spirit.”

One rash of book burnings was not covered in Boissoneault’s article: namely, the bonfires of comics that were occasionally held across the United States in the 1940s and ‘50s. These too were often organized by young people, usually students of Catholic schools. David Hajdu describes several such conflagrations in his book The Ten-Cent Plague: The Great Comic-Book Scare and How It Changed America. Here (from p. 116) he describes one of the few fires held at a public school, in Spencer, West Virginia in 1948:

[Students] had collected more than two thousand comic books of all sorts, from reprints of the Dick Tracy strip to crime comics. The kids brought them into school on Tuesday, October 26, a cool, dry, sunny day, and they piled them high on the grounds behind the building. The books made a small mountain about six feet high. At the end of the day, the six hundred children who attended the school emptied into the yard and assembled in a semicircle facing the comics.

Eighth-grade bonfire leader David Mace, who had been prodded to action by a teacher with the support of the PTA, then led his classmates in a ceremonial incantation:

‘We are met here today to take a step which we believe will benefit ourselves, our community, and our country,’ Mace said. ‘Believing that comic books are mentally, physically, and morally injurious to boys and girls, we propose to burn those in our possession. We also pledge ourselves to try not to read any more.

‘Do you, fellow students, believe that comic books have caused the downfall of many youthful readers?’

The students answered, in unison, ‘We do.’

‘Do you believe that you will benefit by refusing to indulge in comic-book reading?’ Mace continued.

‘Then let us commit them,’ Mace said. He walked a few steps to the pile, took a matchbook from a pants pocket, and lit the cover of a Superman comic.

By the early 1950s, of course, the anti-comic fervor would reach such heights that the industry was forced to implement the Comics Code Authority in order to stave off government regulation. (Hajdu notes one 1955 bonfire in Indiana, Pennsylvania that was expressly intended to burn any old comics that lacked the now-coveted Seal of Approval.) But although comics were already widely saddled with the perception that they were “not real books” and thus burning them did not really count as censorship, many children and more than a few adults expressed uneasiness with the spectacle. Hajdu (118) quotes an editorial from the Charleston (West Virginia) Daily Gazette responding to the 1948 Spencer fire:

The burning of books is too recent in our memories. The Nazis burned them. They went on from there and, in one way or another, burned the authors too. It was the purge by fire of those elements which the Nazi party could not tolerate.

This purge has no place in a democratic educational system. It is not that books as books are sacred. It is just that the idea of burning them is profane. It is a resort to witchcraft when the need is for education, the use of fire when enlightment [sic] is called for.

Largely because the Nazis’ mass book burning became even more indelibly seared in our collective memory in the intervening decades, modern attempts at book burnings are almost universally reviled to such an extent that the organizers usually end up cancelling them. Just last month, a California man (and possible troll) called off his planned “purge…of degenerate literature,” citing “credible threats of violence.”

Of course, as Boissoneault points out in the latter part of her article, burning is no longer the only threat to literature and scholarship, much of which now exists in digital space. Check out the full piece here at Smithsonian.com.