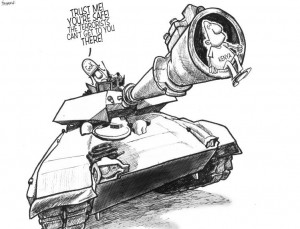 Patrick Gathara is among the best known political cartoonists in Kenya. With a cartooning resume that spans more than 20 years, Gathara has also contributed political commentary to publications like The Washington Post and Al-Jazeera. He also maintains his own blog of political commentary.

Gathara is working during a tumultuous period in Kenya’s history. The country’s supreme court recently annulled the country’s August reelection of incumbent President Uhuru Kenyatta after accepting a petitioners claim that the voting IT system had been compromised. The court ordered that the election be re-run, currently scheduled for October 26. Kenyatta subsequently declared that the court was staging a coup, and the judges who made the ruling are facing death threats.

“I think cartoons are a very good medium to get people to think a bit deeper about the situation they are in,” Gathara told Astrig Agopian with Global Journalist. “Cartoons are satirizing society and presenting a viewpoint, not just to laugh about it, but to think about the contradictions that are there and the stances that they take.” 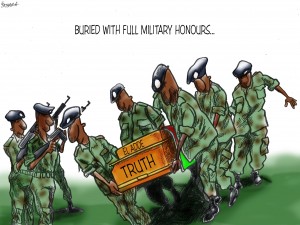 When Agopian asked about whether Gathara has personally faced censorship, he spoke also of the risk of self censorship:

There have been attempts to censor my work. I have never really been employed by the newspapers. I have been a contributor to them. I have always sought to keep my independence. My agreement with them has been that if they do not like a particular cartoon that I have done, then they would not run it. A lot of times, the most controversial cartoons, most people want to stay away from them. It is a real problem within the Kenyan press, self-censorship. Our government is one of the major advertisers of newspapers. According to some figures, up to 60 percent of advertising was, until recently, run by the government. That gives the government a lot of influence over the press.

The press is afraid to antagonize. There is a sense in which self-censorship is a big problem. That is at the editorial level. I had people from the state house call my editors directly to complain about cartoons. Some major cartoonists like Gado were fired from The Daily Nation essentially because the government did not like the work he was doing. So yes, censorship exits. 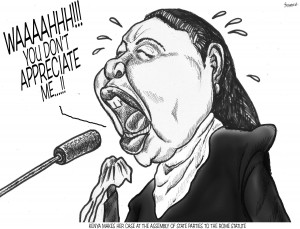 Gathara mentions fellow Kenyan cartoonist Gado (Godfrey Mwampembwa), who was fired from the Kenyan newspaper The Daily Nation — a paper to which Gathara himself contributes — after the paper was pressured to do so by the government. Gado often used his cartoons to address the erosion of free expression in Kenya.

In the interview with Agopian, which can be read in full here, Gathara doesn’t seem overly concerned about his own safety in Kenya. But on the opposite side of the continent, in Equatorial Guinea, graphic novelist Esono Ebalé remains imprisoned after publishing work critical of the country’s dictator Teodoro Obiang Nguema Mbasogo. Authorities there may charge him with money laundering in order to avoid the perception that they are curtailing free expression, proving that some governments will go to extreme lengths to silence opposition.

As Gathara explained to Agopian: “A political cartoonist is always on the cutting edge of free expression, given that they are constantly making fun of powerful people who do not particularly like it.”