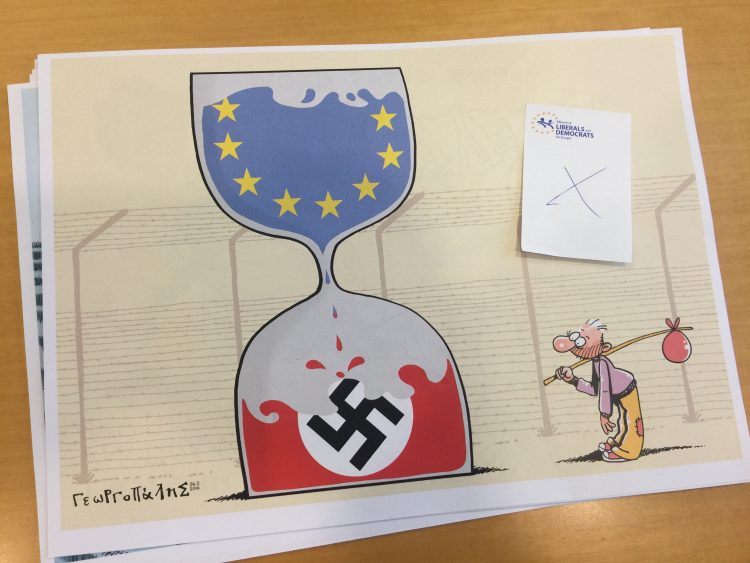 An exhibition of cartoons by Greek artists to commemorate the 60th anniversary of the European Union was marred last month by the rejection of almost half the works that were to hang in a European Parliament building, on grounds that they included “controversial content.”

The exhibition was organized by left-wing MEPs Stelios Kouloglou and Patrick Le Hyaric, from Greece and France respectively. They invited submissions from Greek cartoonists, many of whom naturally took on hot-button EU issues: Brexit, the rise of far-right extremism, the refugee crisis, and the tendency of economic powerhouse Germany to overshadow other member countries.

Before the exhibition could open, it had to pass through a review by British MEP Catherine Bearder, a designated quaestor charged with ensuring that Parliament-sponsored events and exhibits contain nothing judged to be “offensive or of an inflammatory nature or contradictory to the values” of the European Union. To the organizers’ surprise, Bearder rejected 12 cartoons out of 28–marking each with an X on a sticky note bearing the logo of the parliamentary coalition to which she belongs, Alliance of Liberals and Democrats for Europe (ALDE).

According to a Sept. 15 letter of complaint that Kouloglou sent to European Parliament President Antonio Tajani, Bearder said that some of the cartoons should not be displayed because they could interfere with Germany’s Sept. 24 election, even though the exhibit ran only from Sept. 25-29. In the letter, Kouloglou questioned how censorship could be less offensive to EU values than the cartoons themselves:

Political humor and satire are essential elements of our democracy, since the time of Aristophanes. Only anti-democratic regimes do not tolerate it. Two years after the murders of the Charlie Hebdo editorial team because of a few cartoons, our Parliament more than ever must defend the right to satire, the right to smile in the face of fanatics.

Brussels television station Zin TV also interviewed cartoonist Dimitri Georgopalis, whose panel shown above was among those rejected from the exhibition. He was both surprised and disappointed that his warning against extreme nationalism was apparently considered to be inflammatory, he said:

Cartooning holds the power to “speak” of taboo subjects. It has the advantage of being able to activate readers’ thoughts, to stimulate their preoccupations and to present reality from a point of view which they’ve never imagined. It often functions like an alarm bell, a warning. More precisely with my cartoon that was “cut” by the quaestor of the European Parliament, I want to put people on guard against the mutation of Europe due to the continual rise of neo-Nazism. The refugee crisis has brought many debates to the surface.

All of the cartoons rejected by Bearder are available to view here, with added sticky-note captions in English where necessary.