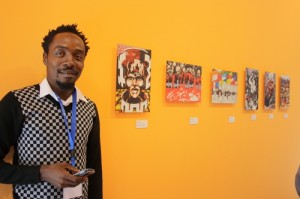 A coalition of human rights organizations, free expression advocates, and cartoonist groups have sent a letter to the leader of Equatorial Guinea, calling for the release of cartoonist Ramón Esono Ebalé.

Ebalé , an Equatoguinean political cartoonist and graphic novelist, now lives in El Salvador where he works under the Spanish pen name Jamón y Queso (Ham and Cheese). He made a brief return to Equatorial Guinea in order to renew his passport. He was arrested on September 16, but the cartoonist has not yet been taken before a judge — required under Equatoguinean law within 24 hours — or charged with a crime (required within 72 hours).

Ebalé frequently targets Equatoguinean dictator Obiang in his political cartoons. He also used Kickstarter to fund a satirical online graphic novel called La Pesadilla de Obi (Obi’s Nightmare), which imagines what Obiang’s life would be like if he suddenly became a regular Equatoguinean citizen. Human rights advocates feared that Ebalé would be charged with criminal defamation for his caricatures, but he will more likely be charged with money laundering and currency counterfeiting — neither of which charge would stand up to scrutiny outside the corrupted judicial system in Equatorial Guinea — so authorities can avoid the perception that they are curtailing free expression.

Index on Censorship, PEN International, CRNI, and the Association of American Editorial Cartoonists are among the signatories on the letter, which follows in full:

We write to express our deep concern in response to the unjust arrest and subsequent detention without charge of Ramón Esono Ebalé in Malabo on 16th September 2017, and to urge you to release him immediately.

Mr. Ebalé and two of his friends were stopped by police, handcuffed, and had their mobile phones seized while getting into Mr. Ebalé’s sister’s car after leaving a restaurant in Malabo. Police then interrogated Mr. Ebalé about his drawings of, and blog posts about members of the Equatoguinean leadership, and told him – in front of his two friends – that he needed to make a statement explaining those drawings and blog posts. It was confirmed by police that only Mr. Ebalé was the target of the arrest, and not his two friends.

Mr Ebalé has learned that he faces potential charges of counterfeiting and money laundering; offences that were apparently never mentioned to him or his friends when they were arrested.   Mr. Ebalé’s prolonged detention without charge gives rise to serious concerns that these allegations are no more than a pretext to justify the ongoing arbitrary deprivation of liberty he is being subjected to.

Mr. Ebalé’s extended detention at Black Beach prison without charge appears to be a clear violation of Equatorial Guinean law, which requires charges to be filed within 72 hours of an arrest. A judge has not mandated preventative detention in his case, which under exceptional circumstances would allow the police to hold him without charge for longer, nor does there appear to be a basis for such an order.

Mr. Ebalé, a renowned cartoonist who has been living abroad since 2011, has now spent 60 days in prison. His arrest in Equatorial Guinea—where he returned to renew his passport—has received global attention with calls for his release from fellow journalists, artists, activists, and human rights and press freedom organizations.

As Equatorial Guinea prepares to join the UN Security Council in January 2018, the world is watching the case of Mr. Ebalé closely. We hope that as your country takes this prominent position on the world stage, your government respects all human rights, including the right to freedom of expression, as enshrined in Article 19 of the Universal Declaration of Human Rights.

In this vein, we call on your Excellency, and the judicial authorities in Equatorial Guinea to respect the rights of all artists, human rights defenders, activists, and, more generally, all individuals in Equatorial Guinea who wish to exercise their right to freedom of expression, peaceful assembly and association without fear of being harassed or prosecuted.

To this end, we urge you to order Mr. Ebalé’s immediate and unconditional release from prison.

Thank you for your consideration.

Help support CBLDF’s important First Amendment work and reporting on issues like these by visiting the Rewards Zone, making a donation, or becoming a member of CBLDF!