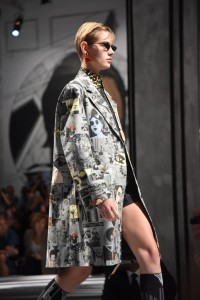 The work of women comics creators has found an unusual home: the high fashion Spring 2018 clothing collection from Prada.

Tarpe Mills’ Miss Fury was the first costumed woman hero in comics, beating Wonder Woman to the stands by mere months. Like many notable women creators of the early 20th century, Mills’ work was influential on contemporaneous fashion.

Robbins is one of the most influential underground comix creators, publishing the first all-women anthology, It Ain’t Me, Babe, and contributing to and shepherding the work of women in Wimmen’s Comix. She’s also an impassioned advocate for the history of women in comics, publishing numerous histories on the topic, including Pretty in Ink, The Brinkley Girls, and more.

Fiona Staples is the co-creator of the critically acclaimed space opera Saga from Image Comics. Her artwork is not small part of the reason the series is so popular and influential. “[Saga’s] gotten wider audience than we could ever have dreamed of, and it’s all down to Fiona,” says co-creator Brian K. Vaughan.

The Prada collection is another indication of just how much comics have saturated popular culture and the growing interest in women’s comics work in particular. The contributions of women to the format have been long overlooked, but more people are taking notice. This month, the Library of Congress is opening an exhibit called “Drawn to Purpose: American Women Illustrators and Cartoonists,” a long-term exhibit featuring dozens of original works by women artists, including Grace Drayton, Sue Coe, Roz Chast, and Raina Telgemeier.

Most of us can only dream about owning clothing from the Prada collection, but we can recognize the contribution women have made to comics. If you want to learn more about how women changed free expression in the format, pick up CBLDF’s history resource She Changed Comics.