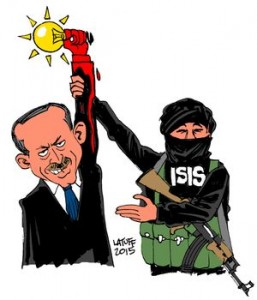 In two separate rulings this week, lawyers for Turkish president Recep Tayyip  have obtained court orders demanding that Twitter remove a total of 12 cartoons mocking him. Twitter has not yet taken action on the orders, which target 11 panels by Brazilian cartoonist Carlos Latuff and one by Dutch cartoonist Ruben Oppenheimer.

Both Latuff and Oppenheimer received notification from Twitter on Sunday that it had been court-ordered to remove their work. In a letter sent to Oppenheimer the social media site noted that it had not followed the order, but “we may be obligated to take action regarding the content identified in the legal request in the future.” If it does eventually remove the cartoons, Twitter will register the takedowns with the Lumen Database, a transparency tool to inform users worldwide of content removed in response to legal complaints.

The 11 cartoons by Latuff, a frequent Erdoğan antagonist and target, mostly concern Turkish policy in Syria and its purported benefit to ISIS. The single work by Oppenheimer, on the other hand, apparently concerns the very sort of manipulation of social media sites that Erdoğan is trying to apply here. The cartoon shows the president sodomizing Twitter’s bird mascot, under the caption “Erdoğan is not a goatfucker.” The same cartoon was removed from Facebook last year without any need for a court order, when moderators decided that it violated the site’s guidelines.

Naturally, Latuff and Oppenheimer have both stated that they have no intention of voluntarily removing their work from Twitter. The notification letter sent to Oppenheimer indicated that the social media site was evaluating “options for legal recourse,” but that the cartoonist himself was also welcome to contest the order through the Turkish court system. Given that Erdoğan has purged about a quarter of the country’s judges since the coup attempt last year, however, critics of his government certainly cannot be assured a fair hearing.