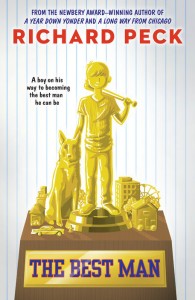 Avid Bookshop in Athens, Georgia, ended a book fair early when a school’s administrator demanded they pull Richard Peck’s The Best Man off the sales floor, despite previously having agreed it could be displayed and sold. The book, which centers around a boy getting to be the best man when his uncle marries his male teacher, was nominated for a Georgia’s Children Book Award, a fact that didn’t stop at least one parent from complaining about its inclusion in the book fair.

The situation began with a bookseller showing The Best Man to a student. Then according to Publisher’s Weekly,

book fair manager Kate Lorraine Rascoe overheard one student’s parent say, “Is this what we’re teaching our children?” A few minutes later, a school administrator approached Avid store manager Caleb Huett and demanded that the book be removed…Huett, who is also the author of the children’s title Top Elf, was taken aback by the speed and abruptness of the school’s decision. “I had trouble even responding,” he said. “I am a bookseller, and I’m gay, and one of my books is featured in this book fair.” According to Huett, the administrator kept repeating the phrase, ‘We just want to take the path of least resistance.’

The book was pulled from the display and placed on a back table while booksellers reached out to the store’s owner, Janet Geddis. This wasn’t enough for the administrator interested in the ‘path of least resistance’, who returned and demanded the book be placed in a box so that no child would accidentally see it.

Initially, an agreement was worked out that the book would remain on the table behind the displays, and that Geddis herself would staff the fair, so as to not force any employees to work in a situation they felt discriminated against the LGBTQIA community. But Geddis herself decided the situation was untenable as it stood, saying she felt “complicit” and that it made her seem “okay with this, which I’m not.”

So Geddis reached out to the head of school, John Thorsen, saying that she would stop the book fair early if Athens Academy didn’t issue an apology and allow The Best Man to be displayed with other Georgia Children’s Book Award nominees as originally planned. Thorsen agreed that it would be best if Avid books stopped the book fair since he would not consent to her conditions.

Avid didn’t want the children and parents who planned on going to the book fair, and didn’t care about the inclusion of Peck’s book, to be disappointed. So they did their own fair that benefited Athens LGBTQ Youth Group. The teacher’s classroom wishlists were still available, so parents interested were able to buy and donate books to Athens Academy, as they would have at the school’s book fair.

Thorsen sent out a letter about the incident to parents lamenting “the miserable situation.” According to the letter the administrator was responding to several parents’ complaints that the book addressed situations they weren’t prepared to talk about with their children yet. And that “it was never at any time our intention to make anyone feel marginalized by this decision.” Thorsen entreated the Athens Academy community to understand,

Athens Academy does not support censorship or discrimination in any form, and we regret any misinterpretation of these circumstances and our commitment to respecting the varying viewpoints of our community. At the heart of this issue is Athens Academy’s support for our parents’ right to engage in conversations with their children in the manner and time they deem most appropriate.

This is the sort of knee-jerk reactionary censorship that happens all too often. A parent complained about a text they didn’t want their child exposed too, and rather than explain to the parent that their choices cannot extend to every other person on the planet, an administrator decided to hide the book. Whether or not someone feels marginalized or discriminated against is seen as less important, or at least less of a headache, than dealing with a parent wishing to restrict the First Amendment rights of the other parents and children around them.

It is crucial for organizations like Avid Bookshop to stand up and say they will not tolerate books being shoved under a table to pave the path of least resistance. Books represent people and viewpoints who have the right to be expressed without erasure everytime someone disagrees. Books also stand for the readers who want to share in the experiences contained within.

Both Avid Bookshop and Athens Academy have repeatedly expressed their respect for each other and their community at large, neither want this to negatively affect future relationships. Avid hopes to challenge the way the school handles such issues in the future, and hopefully encourage difficult, but meaningful, conversations about discrimination and love.

“The most important thing that needs to come from this, not just for this school but for any school that hears about this, or any organization or family or anybody, is that you need to have a clear policy, a clear idea or understanding of how you are going to protect the queer kids in your school and how you are going to protect the gay and LGBTQ people that you know. And I think it’s important that the families at the school and the teachers at the school knew what decision the administrators would make — and I hope that next time they make a different one.”