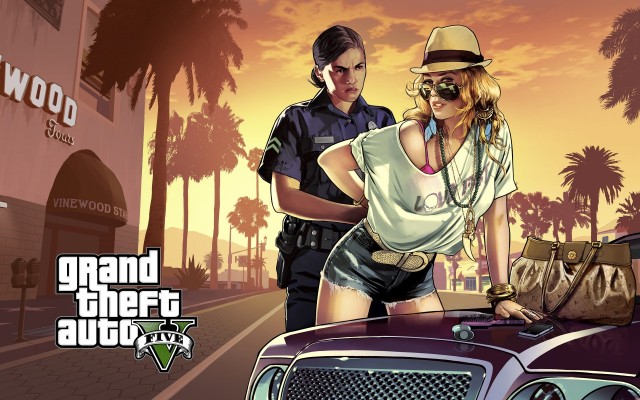 In a case involving the right of publicity, New York’s highest court dismissed Lindsey Lohan’s and Karen Gravano’s lawsuit appeals against Grand Theft Auto V game makers Take Two Interactive. CBLDF filed an amicus brief with other organizations last year urging the court to reject Lohan and Gravano’s arguments on First Amendment grounds, expressing concern about the “constitutional right to create and publish fiction and nonfiction material” in a way that could impact the rights of cartoonists. The court’s ruling preserves those freedoms for now, but also leaves the door open for future challenges.

Both Lohan and Gravano claimed Take Two Interactive violated their right to privacy by appropriating their likeness and personas to create fictional characters in the popular video game Grand Theft Auto V. Lohan claimed that the game used her “shoulder length-blonde hair”, “red-bikini”, and “signature peace sign pose” among other details to create the character Lacey Jonas, who Lohan says, emulates her. Gravano, the daughter of ex-mobster Sammy “The Bull”, claimed it was certain phrases that the character Andrea Bottino used as well as a similarity in family history to Gravano that marked the resemblance. The court rejected those readings asserting in Lohan’s case, “the artistic renderings are indistinct, satirical representations of the style, look, and persona of a modern, beach-going young woman that are not reasonably identifiable as a plaintiff.”

Initially, Take Two Interactive filed motions to dismiss both cases, which were denied on March 14, 2016, by district court judge Joan Kenney. However, on September 1, 2016, the Manhattan Appellate Division unanimously overruled the district court and granted dismissals of both lawsuits. The ruling said both “must fail because defendants did not use [plaintiffs’] ‘name, portrait, or picture.’” That ruling also determined that since the game features unique storylines, characters, and locations, it can be considered a work of fiction and satire protected by the First Amendment.

The March 2016 ruling was subject to appeal by Lohan and Gravano, so they asked the New York Court of Appeals to expand the state’s right of publicity law. New York Civil Rights Law § 51 outlines that only a person “whose name, portrait, picture or voice is used within this state for advertising purposes or for the purposes of trade without the written consent first obtained” is protected by the law and eligible to sue for damages or an injunction. But under their proposed expansion it would add the amorphous concepts of “likeness” and “persona”, which would erode the First Amendment and bring a wide range of comics and prose into precarious positions.

In late December 2017, CBLDF filed an amicus brief with nine other media organizations, asking the New York Court of Appeals to reject Lohan’s and Gravano’s appeal.

“Plaintiffs’ proposed reading of this state’s privacy statute would have a profoundly chilling effect on free speech. Were the Court to accept Plaintiffs’ contention that Defendants’ incorporation of characters allegedly based on them into a highly creative video game implicated their rights under Section 51 of the N.Y. Civil Rights Law, that novel construction of the state would seriously impair amici’s constitutional right to create and publish fiction and nonfiction material including both authorized and unauthorized biographies, “non-fiction novels,” political cartoons, photographs, paintings and other works of art, plays, and myriad other creative works. It would substantially undermine this state’s traditional strong protection for free speech, including for expressive works that draw inspiration from real people and events.”

While the New Court of appeals did agree 6-0 to dismiss this case, they did not address the broader concerns the amicus brief brought forth. The ruling hardly addresses the First Amendment at all, except to note that

In point of fact, Civil Rights Law §§ 50 and 51 ‘were drafted narrowly to encompass only the commercial use of an individual’s name or likeness and no more.’ Based on that slender legislative intent, courts determining questions of the application of Civil Rights Law § 51 have limited the remedial use of that statute. By way of example, we have deemed non-commercial — and therefore non-actionable — the use of a person’s likeness with respect to ‘newsworthy events or matters of public interest’ and other courts have explicitly concluded that works of humor, art, fiction, and satire do not come within the ambit of section 51.

Indeed, at bottom, courts have cabined section 51 ‘to avoid any conflict with the free dissemination of thoughts, ideas, newsworthy events, and matters of public interest’ guaranteed by the First Amendment because ‘freedom of speech and the press. . . transcends the right to privacy” (Previous court ruling citations removed for clarity. Full text here.)

The court also felt that due to its decision, it did not need to address or resolve “plaintiff’s remaining contention with respect to the ‘advertising’ and ‘trade’ elements of Civil Rights Law § 51.”

David Jacoby, a lawyer who has previous litigated on behalf of software firms, but was not involved in this case, gave Law.com a public statement about the decision, indicating he felt it was a

“good result’ for video game companies, as it provides them the freedom to ‘paint culturally evocative images’ in their games.

‘But the decision also leaves the door open for individuals who are recognizably depicted without their permission in some contexts – for example, in a supposedly factually accurate historical game – to assert a claim,’ Jacoby said.”

By expanding the definition of picture and portrait to include digital avatars, which can be artistic in nature, but remaining silent on the First Amendment concerns of a case like this, the court has left the First Amendment vulnerable to more frivolous lawsuits like this one in the future. In a legal system where scholars spend years studying not only what is written in decisions, but also what is not written, the glaring lack of address to the First Amendment implications will certainly be seen by some as an open invitation to attack what once was thought to be unassailable.