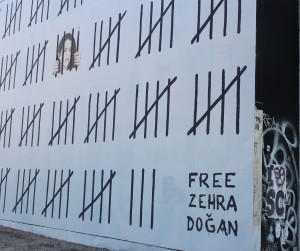 Well known street artist Banksy, in collaboration with John Tsombikos, put up a mural in the Bowery to bring attention to the unjust imprisonment of Zehra Doğan, a Turkish artist and journalist, who was sentenced to nearly three years in jail for a painting she did.

The mural, which went up Thursday, March 15, relies on simplicity – being comprised of slashes against a wall counting the days that Doğan has been imprisoned already. A watercolor representation of the artist herself is placed behind one set of slashes to show her imprisonment, one prison bar replaced with a pencil. Doğan seems to gaze off at the bottom right corner, which simply reads “Free Zehra Doğan.” The real Doğan has no knowledge of the mural, Banksy told the New York Times.

This first night the mural was revealed, a projection of the dark painting Doğan is imprisoned for showed over the mural. Based off a photo Doğan saw, she painted the rubble of a Kurdish town, destroyed by tanks, with the Turkish flag flying over the town. She painted the tanks as surreal monsters. The Turkish government said that the painting compromised military security, even though it was based on a government photograph.

Banksy said in a statement, “I really feel for her. I’ve painted things much more worthy of a custodial sentence.” 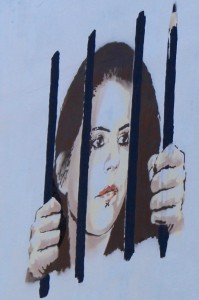 John Tsombikos, who partnered with Banksy for this project, has also been imprisoned for his artwork. Tsombikos, is probably more famously known as “Borf”, a misnomer that came out of the graffiti campaign of the same name that landed him a brief stint in jail and a hefty $12,000 fine in 2005. This is not the first time Tsombikos has been involved with Banksy, having had a solo show at the anonymous artist’s London gallery in 2013.