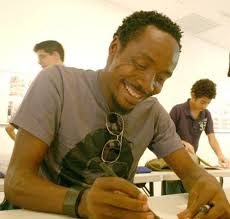 After being falsely imprisoned in Equatorial Guinea for five months and nineteen days, political cartoonist Ramòn Esono Ebalè was finally released on March 7th. It had been just over a week since the one day trial of Ebalè, where the prosecutor asked for the counterfeiting and forgery charges to be dropped due to lack of evidence, cementing opinion that the charges were fabricated.

According to the Sierra Leone Times it was clear that the police officer who had made the accusations used as pretense to imprison Ebalè, had no actual knowledge of Ebalè or of the supposed crime. After offering details to the court that didn’t match the official account, the officer confessed he had simply acted on orders given to him by his superiors, after which the prosecutor had no choice but to recommend the charges be dropped.

Angela Quintal, the Africa program director at Committee to Protect Journalists, summarized the feelings of many after Ebalè’s release. “We are delighted that Ramòn was acquitted and is finally free. The fact that the state’s main witness recanted underscores the point that authorities manufactured the charges in the first place. Ramon should never have spent a single day behind bars and we trust that he will not be subjected to any further reprisal.”

Sail Tripathi, chair of PEN International’s Writers in Prison Committee, echoed Quintal’s relief at Ebalè’s release, and reiterated that this is a situation that never should have happened To begin with. Tripathi also urged authorities that the best way to demonstrate Equatorial Guinea’s commitment to free speech was by ensuring Ebalè safe return home to his family, where he can resume his important work as a political cartoonist.

The positive outcome of Ebalè’s trial is largely due to the international media attention that many human rights groups put on Equatorial Guinea. The vigilant news coverage created constant pressure and accountability, without which Ebalè very easily could have stayed in prison, or been convicted of a crime that not only he didn’t commit, but never even happened.

Tutu Alicante, a friend of Ebalè’s and the director of EG Justice, a group that advocates human rights and transparency of rule in Equatorial Guinea, put out an apt call to action:

Ramòn Esono Ebalè has been released from prison, but the systemic problems that landed him there in the first place, are unchanged. Hopefully, some of the people who have followed this story will continue to keep their eyes on Equatorial Guinea, and encourage others to do the same. Without accountability and international attention, there is little hope others who dissent will fare as well as Ebalè did.