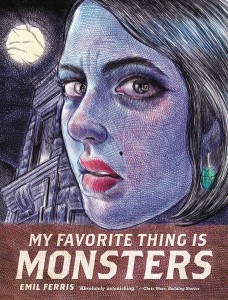 The 2018 Hugo Award Nominations are out, and critical darling My Favorite Thing Is Monsters is the only stand-alone graphic novel in the running for Best Graphic Story. Comic Riffs writer, Michael Cavna, thinks this nomination signals that “Emil Ferris’s year of coronation has arrived.”

As we enter the first stages of the book awards season, Ferris’s debut graphic novel, “My Favorite Things Is Monsters” (Fantagraphics), will try to make good on the critical love it received upon its release last year.

So it bodes well that “Monsters” is nominated for a Hugo for best graphic story, right alongside established comics rock stars.

And the list is stacked with some heavy hitters, including three previous Hugo Award-nominated series.

Monstress stands poised to potentially win the award for the second consecutive year, whereas Brian K. Vaughn and Fiona Staples’s Saga hasn’t won since its the first volume despite this being its fourth nomination. Bitch Planet and Black Bolt are both enjoying their first Hugo nominations, while Paper Girls has been nominated before and never won.

If you haven’t read My Favorite Thing Is Monsters yet, grab a signed copy for your CBLDF donation before the Hugo Awards August 19th at WorldCon. You can also pick up signed editions of Saga and Paper Girls to add to your collection, or these exclusive Paper Girls enamel pins if you want to wear your favorite nominee on your sleeve.

← Website Protesting Book Ban Taken Down by Court Order
Speak Out at MARCH: The Power of Student Voices on April 11! →