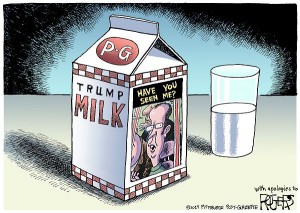 Award-winning editorial cartoonist for The Pittsburgh Post-Gazette, Rob Rogers, had a full week’s worth of cartoons killed by his superiors, an unprecedented editorial move that prompted public backlash in support of the cartoonist. Rogers has subsequently decided to take a vacation while differences between himself and his supervising editor are settled.

According to The Washington Post, Rogers had nine different cartoon ideas and ten finished cartoons rejected by The Post Gazette since March. This is highly unusual for a full time editorial cartoonist. Rogers has been with The PPG for 25 years, and worked under the tenure of four different supervising editors, during which time he estimates having two to three cartoons rejected each year on average.

Michael Cavna of The Washington Post spoke with Rogers why this is happening now,

“I can only speculate,” the left-leaning cartoonist says. “While most of the killed cartoons or ideas were [directly] critical of President Trump, there were also some dealing with the NFL kneeling policy, issues of racism and the FBI.” More broadly, most of the spiked cartoons satirized issues on which Trump has taken a stance or that reflect the larger partisan divide in the Trump era.

But what in todays current events doesn’t reflect the larger partisan divide this country is experiencing? As evidenced by the cartoons axed by the Pittsburgh paper, when you can’t even make fun of a TV star’s rascist twitter rant, without it seeming critical of the highest office in the land, certainly nothing is safe from partisan lines.

But editorial cartoons are not news, they are opinion by nature. Some skew left, some right, and some find fault and humor on both sides of the aisle. But the humor comes from skewering those in power, utilizing hyperbole to make the giant workings of the world a little funnier. A fair and balanced editorial cartoon, is just an illustration, something akin to a courtroom sketch.

However the editor-in-chief of The Pittsburgh Post-Gazette, John Robinson Block, doesn’t agree with the media’s representation that this is a political issue. In a statement to The Washington Post Block wrote, “This is an internal, personnel matter we are working hard to resolve. It has little to do with politics, ideology or Donald Trump. It has mostly to do with working together and the editing process.”

Rogers seems bolstered by the public support he has received, and undeterred by his editors comments about the situation. “I wake up every morning excited to fight the good fight, to afflict the comfortable, to speak truth to power, and, yes, to make people laugh. I love my job. I just want to do my job.”

The Association of American Editorial Cartoonists released a statement about the absence of Rogers work in the The Post-Gazette,

We would take this opportunity to remind all editorial page editors that their responsibility is to the readers (among whom in Pittsburgh, Rogers cartoons are wildly popular) and to the open and ongoing search for truth in contending opinions. The editorial pages are a public forum, not a members-only private resort in Florida.