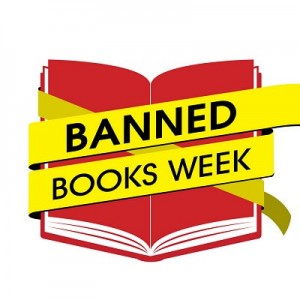 Voting opens tomorrow, July 18th, in the U.K. where they are in search of the public’s favorite banned book. To get ready for Banned Books Week in September, a list of commonly banned, censored, and challenged works compiled by Index on Censorship and Media Diversified will be split up into groups of five, and every two weeks a group will be listed so people can vote on their favorite. The contest will be running until August 22nd, and Banned Books Week UK is hoping it will encourage people to read these titles over their summer holidays and exercise their freedom to read.

People participating in the U.K. can even win a box of 10 banned books donated by Books. Two of the works included are, Salman Rushdie’s The Satanic Verses and Mikhail Bulgakov’s The Master and the Margarita. All the books in the box are ones that have been previous challenged or banned.

”Titles include texts well-known for having caused controversy, such as The Communist Manifesto and Lady Chatterley’s Lover but it also includes novels less well-known for having provoked the censors’ ire such as collections by Maya Angelou, who is one of the USA’s most censored authors; J.K. Rowling’s Harry Potter and the Philosopher’s Stone and even children’s book And Tango Makes Three condemned for highlighting gay parenting….by penguins.”

2018 is the first year that Banned Books Week will be celebrated across the entire United Kingdom. Jodie Ginsburg, chief executive of Index on Censorship, said of the nationwide celebration, “This year marks 50 years since we abolished government censorship of the theatre in this country.It’s a good time to think about what is getting published today and why – and who are the modern censors.” Index on Censorship is a London-based non-profit organisation that publishes work by censored writers and artists and campaigns against censorship worldwide. They were the first International member of the Banned Books Week Coalition in America.

Banned Books Week launched in the U.S. in 1982 in response to an uptick in challenges to books in schools, libraries, and bookstores. According to the American Library Association, since the creation of Banned Books Week, more than 11,300 books have been challenged, but research suggests that the majority of incidents are never reported.

Banned Books Week 2018 will be held September 23 – 29. The 2018 theme, “Banning Books Silences Stories,” is a reminder that everyone needs to speak out against the tide of censorship. For more updates about the upcoming Banned Books Week, stay tuned to cbldf.org and bannedbooksweek.org for information about events and support all across the country.