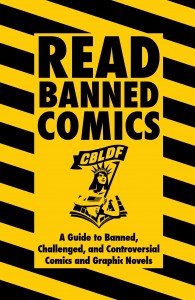 Banned Books Week is happening September 23 – 29, and CBLDF is excited to release Read Banned Comics A Guide to Banned, Challenged, and Controversial Comics and Graphic Novels to help you get ready for all the festivities!

Read Banned Comics is a free resource that delves into comics that are challenged, how to report and fight censorship, programming ideas, and more tips to make a celebration of Banned Books Week in your community! CBLDF is an official sponsor of Banned Books Week, and this year’s theme is Banning Books Silences Stories, a call to action for everyone to stand up against censorship. The annual celebration of the freedom to read will be observed in libraries, schools, bookstores, and other community settings across the nation and the world. The free handbook can be viewed and downloaded below.

Want a stack of Read Banned Comics to hand out in your classroom, library, book club, or at a special Banned Books Week event? Grab hard copies and special gear at https://cbldf.myshopify.com/products/read-banned-comics-a-guide-to-banned-challenged-controversial-comics-gns