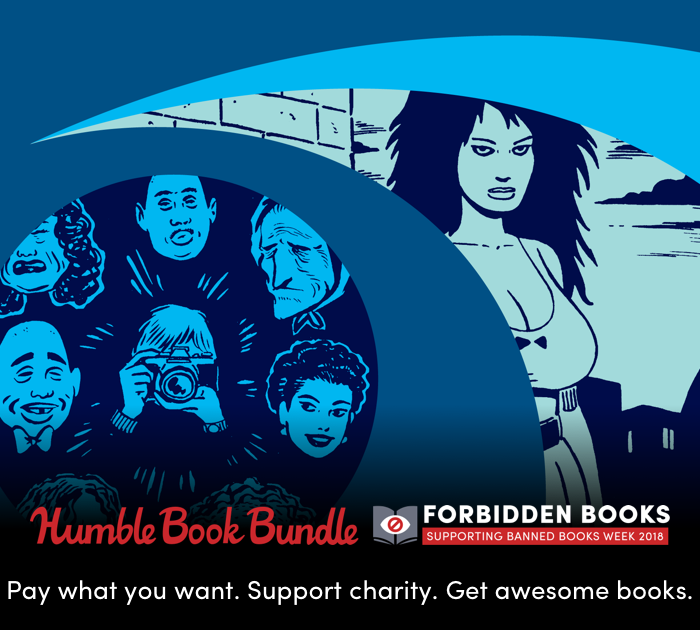 Celebrate Banned Books Week in Humble Bundle style with the new Forbidden Books Bundle, a collection of banned and challenged books by some of the world’s most influential authors

There’s just one week left to take advantage of Humble’s Forbidden Books Bundle, featuring a collection of banned and challenged books by some of the world’s most influential authors! Mark Banned Books Week this year by adding an incredible selection of contested books and comics to your digital library while supporting Comic Book Legal Defense Fund and National Coalition Against Censorship – two organizations fighting every day to protect the right to read!

Pay what you want to get a huge selection of challenged and banned books for all ages. Get the picture book based on a true story, And Tango Makes Three that has been challenged for its depiction of gay penguins, or Albert Einstein’s Essays in Humanism, which was perceived as so dangerous, the Nazis burned it. Get two different texts from the CBLDF archives with rare Neil Gaiman essays – Free Speeches and God & Tulips that talk about the author’s personal experience with having his work censored. Plus the first volumes of critically acclaimed graphic novel series’ Bone, Saga, Palomar (Heartbreak Soup).

Customers can pay just $1 or more for:

Customers who pay $8 or more will also get:

Those who pay $15 or more will receive all of that plus:

Proceeds from this bundle benefit the work of the National Coalition Against Censorship and Comic Book Legal Defense Fund, partners in the Banned Books Week Coalition and Kids’ Right to Read Project. Together, the NCAC and CBLDF help respond to bans and challenges of books with expert advice, letters of support, and legal expertise. They also collaborate to produce valuable resources to protect Free Expression, such as Be Heard!, a free comic book to protect student rights released earlier this year.

What are you waiting for?Get the bundle now!

About the National Coalition Against Censorship (NCAC)
NCAC’s mission is to promote freedom of thought, inquiry and expression and oppose censorship in all its forms. The Coalition formed in response to the 1973 Supreme Court decision in Miller v. California, which narrowed First Amendment protections for sexual expression and opened the door to obscenity prosecutions.
Over 40 years, as an alliance of more than 50 national non-profits, including literary, artistic, religious, educational, professional, labor, and civil liberties groups, we have engaged in direct advocacy and education to support First Amendment principles. NCAC is unique in that we are national in scope, but often local in our approach. We work with community members to resolve censorship controversies without the need for litigation. For more info, check out ncac.org.