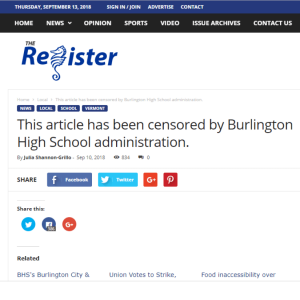 Burlington High School students had the opportunity to sit down recently with administration and discuss developing new guidelines to preempt censoring student journalists in the future. This meeting came after the school newspaper, BHS Register, was censored in September for breaking a negative story about a staff member, despite recent laws in Vermont designed to prevent such administrative involvement.

September 10th of this year BHS Register was the first publication to report on an investigation of the school’s guidance director, Mario Macias, by Vermont’s Agency of Education for “unprofessional conduct.” The next day the principal Noel Green, demanded the article be taken down. They complied but decided to leave up the links on social media which directed readers to a page explaining that the administration censored the article.

The news story picked up regional and national attention, the censorship angle attracting more attention then the high school newspaper would have gotten by breaking the story of one person’s misconduct. Among the support the Register received was a letter of support co-written by the Vermont Press Association (VPA) and the New England First Amendment Coalition (NEFAC) condemning Green’s actions censoring the student press. The two organizations requested that the article be republished and a formal apology be presented to the Register from the school district and the administration. Nataleigh Noble, one of the Editors of BHS Register, was quoted as saying, “I didn’t realize how many people were so passionate about the First Amendment.”

The same day the letter from VPA and NEFAC arrived, Green reversed his decision to pull the article. And that should be the end of the story, but of course, it isn’t. The day following the article’s return to the website, the newspaper was informed that Green reinstated an outdated policy of “prior review” for all news articles. So the students now had to submit every piece of writing to the administration two days before publication. The prior review policy had been removed in 2017 when Vermont passed a New Voices law (HB 513), designed to reinstate the First Amendment rights of students in the state to the level of pre-Hazelwood rights.

“In Hazelwood, the Supreme Court held that a principal ‘acted reasonably’ in censoring a student newspaper due to ‘legitimate pedagogical concerns’ including the protection of a pregnant student’s privacy. The Court distinguished the reasonable exercise of authority over a school-sponsored publication (that was part of the journalism curriculum) from the tolerance that must be afforded a student’s speech under the First Amendment absent a reason to believe that the expression will substantially interfere with the work of the school or impinge on the rights of other students.”

According to the coverage from Student Press Law Center, the New Voices legislation passed in 2017 helped knock down the attempts to reinstate the prior review, but it seems it left the student journalists and administration in policy limbo, with neither side happy.

Now, as of last Thursday, Principal Green has sat down with editors from BHS Register in hopes of co-creating school guidelines that don’t fail the New Voices legislation but provide the administration the security it desires. Local news reports that the administration approval of articles is a sticking point for both sides.

CBLDF commends the students fighting to put guidelines in place for generations of journalists to come. Strong policies and guidelines help protect the rights of students making it impossible to prioritize administrative whims over a free press.

As Julia Shannon-Grillo, a BHS Register editor, author of the article that was censored, and member of the New Voices Law Policy Committee, told local news,
“It’s about establishing a practice and a set of guidelines for future journalists.” She added, “The purpose is to outline what our rules are so that this sort of incident doesn’t happen again.”