This time of year it seems that everyone is asking readers to look deep in their hearts and wallets and consider making tax-deductible donations. It can become numbing to hear these pleas repetitively and not to hear about why these donations are crucial to protecting important freedoms in the year to come. So as a reminder as to what we are all fighting for, here are two victories that would not have been possible without the generous support of CBLDF’s members and followers. Thanks to vital donations made in 2017, CBLDF was able to mobilize quickly and protect everyone’s freedom to read in 2018. Two crucial victories both came following attacks on LGBTQ literature.

DiSturco added, “We also don’t want children to be singled out, we feel that would not be in the best interest for children or the community,” referring to the “opt-out” policy. The high school’s “opt-out” policy was already in place for situations like these. Any student uncomfortable with an assigned text was allowed and encouraged to choose to read an alternative assignment. But to DiSturco and Mark Bisci, the two parents who voiced complaints about Fun Home, the policy wasn’t sufficient. and they don’t want children singled out for not participating. The sensitivity they expressed to the isolation hypothetical students might experience reading a different text in class was tone-deaf to the isolation of real students who couldn’t find themselves represented in the curriculum.

Jewett said decisions about curriculum took into account multiple perspectives. The changes were inspired by messages solicited by Jewett from graduating students about their experiences throughout high school, and how things could be improved. After some students complained that the curriculum didn’t reflect the full spectrum of gender and sexual identities, Jewett took that feedback to heart.

“They said they felt marginalized because we were not more inclusive. So I just want you to understand that’s something that really resonated with me and really concerned me. I did not want students to graduate from our school having had an experience where they didn’t feel included in our school community.” 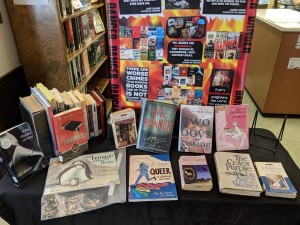 Back in May, Comic Book Legal Defense Fund in collaboration with National Coalition Against Censorship as part of the Kids Right to Read Project, sent a letter to Superintendent Jewett in support of the inclusion of Fun Home in the curriculum.

Graphic novels combine visual art with literary and cinematic techniques for educationally rich storytelling. Alison Bechdel’s Fun Home is an essential text that has been recognized with significant literary awards. The book has been heralded within the literary and arts community as “a pioneering work” in the comics and memoir genres. (New York Times Sunday Book Review). The inspirational novel chronicles Bechdel’s real-life struggles of sexual identity, emotional abuse and domestic strife while growing up in rural Pennsylvania with a closeted gay father. Bechdel’s memoir is resonant with many youth experiences and offers teen readers a safe place to examine questions related to personal identity, family relationships, and the need to face the truth in their own lives.

The full letter and as well as the CBLDF Discussion Guide that was included in the email to the Superintendent can be read here.

Then back in September, CBLDF learned of an attempt to ban several books, including the LGBTQ themed graphic novels My Lesbian Experience With Loneliness by Nagata Kabi and Queer: A Graphic History by Meg John-Barker and Julia Scheele from the Rumford Public Library in Maine. CBLDF mobilized on social media to urge all Rumford area residents to attend the public library board meeting and defend everyone right to read freely.
The attempt to ban the books came from three local church leaders who saw the library’s Banned Books Week display, and decided without an ironic bone in their bodies, to try to ban the titles they didn’t approve of. The challenge called out Nagata Kabi’s manga as “immodest and inappropriate for a public setting” on the basis of its cover alone. The letter challenging the display about called out other books like Two Boys Kissing for “promoting homosexuality.” According to a Facebook post by local resident Katrina Ray-Saulis, one of the letter’s signers “has verbally expressed that he would like to pursue the destruction of all books regarding homosexuality in the library.”

CBLDF  was among the first to respond in support for the library, alongside National Coalition Against Censorship and the American Library Association’s Office for Intellectual Freedom. Thanks to the far reaching support of CBLDF followers who shared the story and the stalwart and outspoken locals who attended the library meeting and fought for the freedom to display books that cover the interests and stories of many different voices, the challenge was shot down and the display stayed standing. “The freedom to read is expanded when citizens have the right to make up their own minds,”  said CBLDF Executive Director Charles Brownstein about the decision, adding “We commend the board of the Rumford library for respecting their citizens and upholding their rights.”