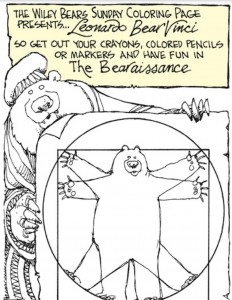 Panel One in Sunday’s “Non Sequitur”

Sunday, February 10th, some sharp-eyed newspaper readers got a shock with their morning funnies when long-running, syndicated comic strip, Non Sequitur contained an obscene message to the president. The creator, Wiley Miller apologized and assured readers and publishers that it was an accident, but that was not enough to stop over a dozen newspapers from dropping the comic strip.

This past Sunday’s Non Sequitur, a strip usually known for its subtle sense of humor, was an uncolored three-panel sight gag based on replacing Leonardo DaVinci and his subjects with bears, reveling in the pun “Bearaissance.” The first panel was “Leonardo Bear-Vinci” holding up his iconic work “The Vetruvian Bear.” The second panel was set up to look like the design sketches of a flying machine, except with a bear attempting to use it. All over the panel are illegible scrawled notes, meant to look like creators schematics, but in the bottom right corner one of the notes was not illegible enough, its message “fondly” inviting the US President to self-perform an impossible physical act, in less polite terms. 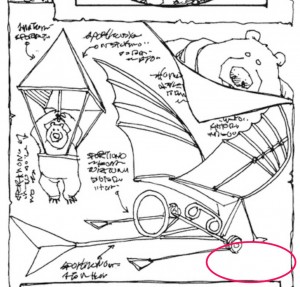 GoComics.com edited the online comic to remove the obscene scribble

In a statement to The Washinton Post, Miller cited the inclusion of the insult in the comic a mistake,

“When I opened the paper Sunday morning and read my cartoon, I didn’t think anything of it, as I didn’t notice the scribbling that has now caught fire,” Miller said in a statement to The Post, noting that the scribble had been done several weeks ago at a time when he was frustrated by a White House action and forgot to remove it.

“It was not intended for public consumption, and I meant to white it out before submitting it, but forgot to. Had I intended to make a statement to be understood by the readers, I would have done so in a more subtle, sophisticated manner,” he said.

The argument is rather convincing to any fans of Non Sequitur, as his humor doesn’t tend towards the crass. As The Guardian pointed out, the next day Miller’s strip “shows an older couple whose cats have taken up the whole sofa. The wife says to her husband: ‘They’re dug in on their position … unless you can open a can of tuna.’ The caption reads: ‘Averting a border crisis.” 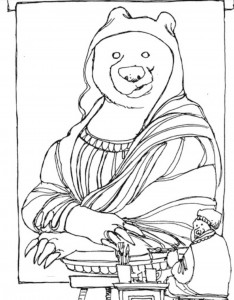 According to The Post, however, this past Sunday, when the comic was published, Miller mentioned an “easter egg” to his Twitter followers in the day’s strip. The tweet has subsequently been deleted, though his tweets calling the president things like “a gaslighting projectionist” and more obscene names are still there, demonstrating Miller is not hiding interested in hiding his personal beliefs or relegating them to the bottom right corner of his art.

The Post reports that more than twelve local papers permanently removed Non Sequitur following the mistake, including Ohio’s Columbus Dispatch. The Dispatch said the decision to cancel the strip came down to trust, “Wiley Miller has lost our trust. Therefore, we will not publish his work going forward.” Another local newspaper in the region, The Butler Eagle, in northwestern Pennsylvania, assured readers, following an apology, that they were getting rid of the strip due to its vulgarity, not its politics.

Support CBLDF this February with any Humble Bundle! Or fight on the front lines of free expression all year long by becoming a CBLDF member!