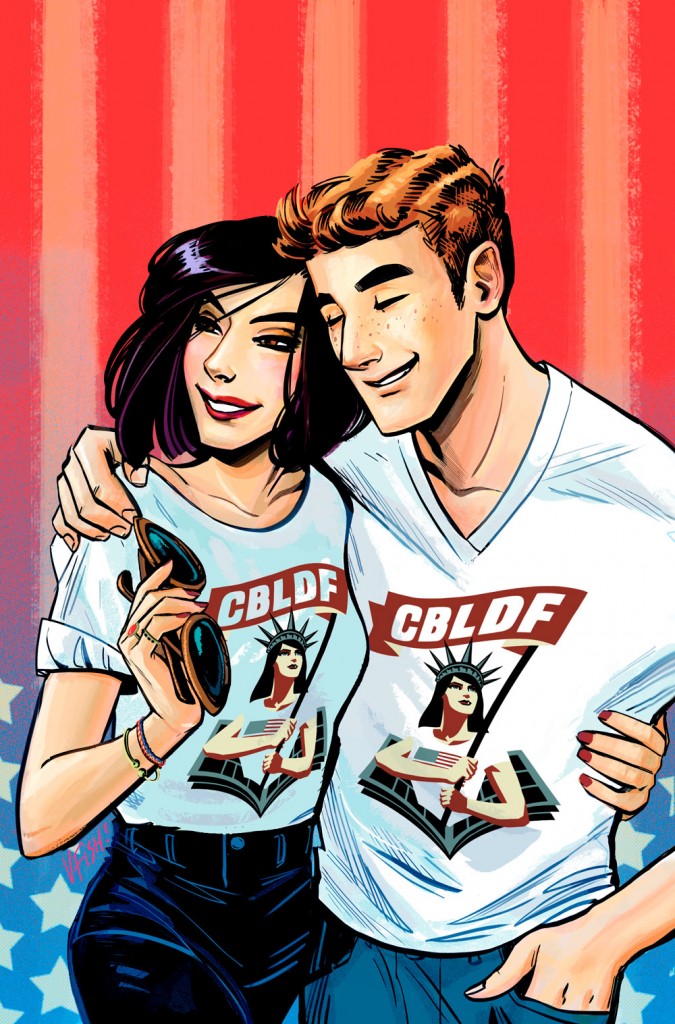 Archie Comics is proud to join the Comic Book Legal Defense Fund as the organization’s newest Corporate Member! Archie Comics is the leading mass market comic book publisher in the world, with franchises that have introduced comic books, art, and reading to billions of people all over the world. Their iconic characters, including Archie, Jughead, Betty and Veronica, Reggie, Kevin Keller, Josie and the Pussycats, Sabrina the Teenage Witch are spotlighted weekly on The CW’s ‘Riverdale’ and upcoming ‘Katy Keene’ TV series and the Netflix series ‘Chilling Adventures of Sabrina’, and have been featured in animation, television, film and music.

Archie co-President Alex Segura says, “CBLDF’s commitment to protecting, preserving and promoting the comics medium in all of its diversity helped make the medium what it is today. Archie Comics is proud to support the organization’s valuable work.”

CBLDF provides legal and educational resources to protect the freedom to read comics. The organization is a partner in Banned Books Week, the Kids’ Right to Read Project, Free Comic Book Day, and other national institutions that support intellectual freedom and literacy. CBLDF’s work extends from courtrooms to classrooms to conventions, where CBLDF defends the freedom to read by providing legal aid, letters of support in book challenges, challenges to unconstitutional legislation, and a robust schedule of programs about current and historical censorship to audiences all over the world. Most recently the organization co-published the civics awareness comic book This Is What Democracy Looks Like in partnership with the Center for Cartoon Studies, and is providing support for numerous identity censorship cases across the United States. You can learn more about their work, and sign up for their upcoming free webinars at www.cbldf.org.

CBLDF Executive Director Charles Brownstein says, “The team at Archie Comics are doing innovative work that’s connecting with the next generation of readers. We’re excited to have their support for our work to guarantee that everyone enjoys the freedom to read, create, and teach comics.”

Archie Comics is the leading mass market comic book publisher in the world and the home to a wide array of the most popular humor, action-adventure and superhero characters in entertainment, including Archie, Jughead, Betty and Veronica, Reggie, Kevin Keller, Josie and the Pussycats, Sabrina the Teenage Witch, Afterlife With Archie, the Dark Circle Comics superhero characters (The Black Hood, The Fox, The Shield, Sam Hill and more), Li’l Jinx and many more. Archie Comics have sold over 2 billion comics worldwide and are published around the world in a number of languages. In addition to comics, the Archie Comics characters are spotlighted weekly on The CW’s ‘Riverdale’ and upcoming ‘Katy Keene’ TV series and the Netflix series ‘Chilling Adventures of Sabrina’, and have been featured in animation, television, film and music.

Comic Book Legal Defense Fund is a non-profit organization protecting the freedom to read comics! We provide legal aid to readers, creators, librarians, retailers, publishers, and educators who face the threat of censorship. We monitor legislation and challenge laws that would limit the First Amendment. We create resources that promote understanding of comics and the rights our community is guaranteed. Every day we publish news and information about censorship events as they happen. We are partners in the Kids’ Right to Read Project and Banned Books Week. Our expert legal team is available to respond to First Amendment emergencies at a moment’s notice. CBLDF is a lean organization that works hard to protect the First Amendment.