Last Thursday, 142 days after turning themselves in on fabricated charges, cartoonist Musa Kart and four of his colleagues walked out of a prison and into the waiting arms of friends, family, and supporters, ready to celebrate the order of release from Turkey’s highest Court of Appeals. In total 14 staff members were charged with “aiding a terror group without being a member” after a failed coup d’état in Turkey which the paper had nothing to do with. It was the independent nature of the Cumhuriyet as well as their critical pieces about Turkey’s President Recep Tayyip Erdoğan that landed everyone in jail, surprising no one, as Turkey is listed as one of the worst countries in freedom of the press year after year.

Cartoonists Rights Network International (CRNI) and Cartooning for Peace released a joint statement after the news came out:

CRNI and Cartooning For Peace are relieved, gratified and overjoyed to hear that Musa Kart has been released from prison after a Supreme Court decision overturned his criminal conviction for “support of a terrorist organisation without being a member”. The process of his acquittal is not yet fully complete — the original criminal court must formally quash their verdict — but in effect his innocence has been restored in the eyes of the law.

The press release goes on to say that all told this story has been a nearly unendurable 3 years for Kart. 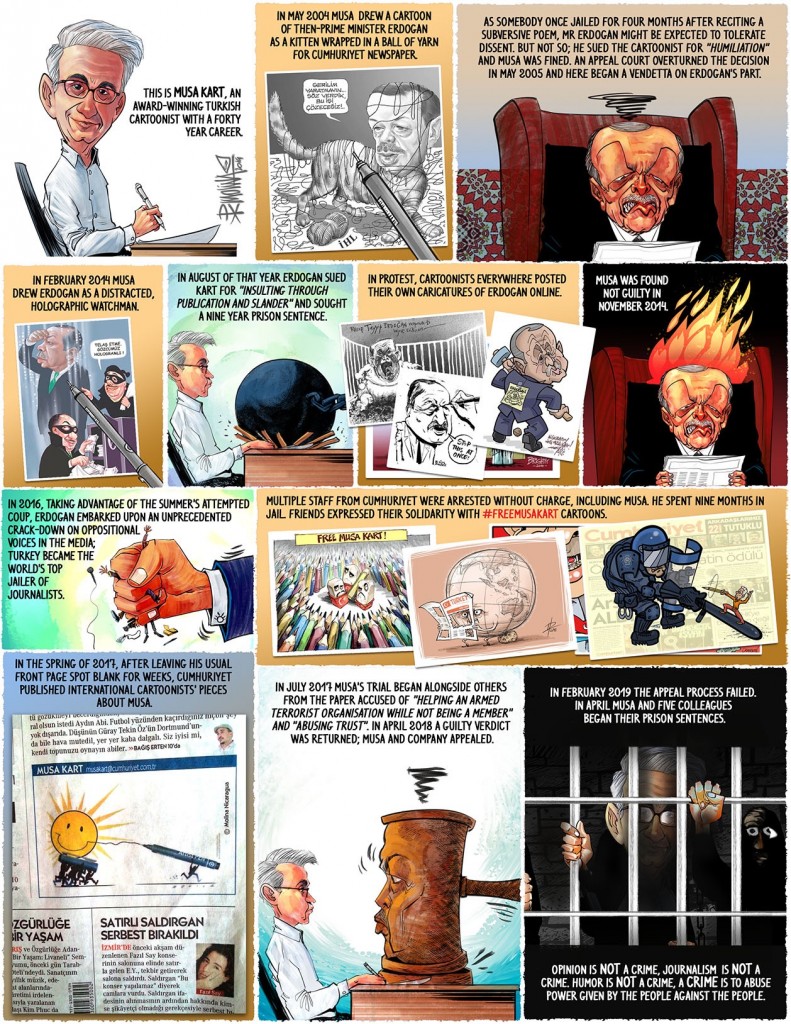 After the initial set of appeals failed, Kart and his colleagues were alerted to the arrest warrant issued for them. Not wanting to give the Turkish authorities a chance to claim they weren’t cooperating, they handed themselves over. As Kart  walked into jail almost five months ago, he was reported to have said:

I believe people will see the injustice that is being done here. Several brave reporters have recently summarized what’s happening in Turkey: people who punch the leader of a major political party are permitted to go free while those who draw cartoons or report the news are put in prison. We look forward to the day when journalists need not make proclamations such as these in front of prison gates.

Musa Kart, always the optimist, was right. Many cartoonists around the world wrote, draw, and spoke about the imprisonment. And #FreeMusaKart became a rallying cry for those pointing out the censorship of political cartoonists, and the bullying of those speaking truth to power with their words and images.

← Don’t Miss CBLDF at SPX this Weekend! With Raina Telgemeier, Chris Ware, and More!
Get Ready For Banned Books Week With CBLDF! →