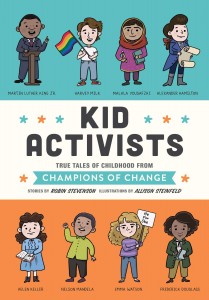 Last month, award-winning children’s author Robin Stevenson had a planned event cancelled the night before due to LGBTQ+ historical figures in her book Kid Activists: True Tales of Childhood from Champions of Change. This week, Illinois State Representative Terra Costa Howard has invited the author back to speak at the High School in the county in an effort to demonstrate the area’s inclusivity. But whether these efforts are damage control after a letter Stevenson wrote to the school district went viral or a heartfelt mea culpa to their biased behavior, is yet to be seen.

Kid Activists: True Tales of Childhood from Champions of Change is written by Stevenson and illustrated by Allison Steinfeld. It is a collection of stories about 16 well known historical figures who stood up for social change, but focuses on true but lesser known tales from their early lives. The book profiles Susan B. Anthony, James Baldwin, Ruby Bridges, Frederick Douglass, Alexander Hamilton, Dolores Huerta, Helen Keller, Martin Luther King Jr., Nelson Mandela, Iqbal Masih, Harvey Milk, Janet Mock, Rosa Parks, Autumn Peltier, Emma Watson, and Malala Yousafzai. In between the main stories there are asides about some of the key smaller figures surrounding these important people, as well as frequent cartoons throughout that Kirkus Reviews notes “keeps the hardships and violence that many of them experienced safely distant.”

The parental complaint that caused the cancellation was regarding the inclusion of Harvey Milk in the book. Stevenson wasn’t planning on discussing Milk that trip, not that that makes a difference to anyone, but just the existence of Milk was enough to cancel the entire event. Stevenson retaliated with her strength, words, and penned a letter following the abrupt cancellation. The entirety is well worth the read, but here are some of the important points from the letter:

This action sends a very harmful message to students, particularly students who are themselves LGBTQ+ or have family members who are part of the LGBTQ+ community. It says their lives can’t be talked about, that their very existence is seen as shameful or dangerous. It says that no matter how significant their accomplishments, or how much they contribute to the world, they can be erased and made invisible because of who they are. It reinforces ignorance and bigotry. It undermines the school’s efforts to encourage all students to act with empathy and understanding. It perpetuates homophobia and promotes silencing, shaming and discrimination…

In choosing to cancel the presentation, you denied 175 students the opportunity to hear a presentation from an award-winning children’s author. You legitimized a concern rooted in homophobia, gave this priority over the wishes of the school administration and staff who had requested the visit, and made the climate in the school less safe for LGBTQ+ staff and students.

There are other ways you could have chosen to respond. You could have told this parent that Harvey Milk is an important American historical figure who is widely recognized for his service and his significant contributions to the country before his assassination at the age of 48. . .

You could have explained that an inclusive curriculum is important and shared research findings from GLSEN that support this. You could have talked about why human rights, diversity and activism are essential issues for students to learn about. And you could have, of course, reminded the parent that they were free to opt their own child out of the talk if they disagreed.

Common Sense Media gives the book Five Stars and says it’s appropriate for ages 8+, while rating books is problematic for intellectual freedom, we can take this guideline, for just that, a guide to an age many may find appropriate for their child to interact with these stories. So why is Stevenson talking to a high school instead of the original elementary school? As National Coalition Against Censorship explains in their resource Defend LGBTQ Stories,

[A] common challenge to LGBTQ-themed books conflates sexual identity with sex.
Advocates of censorship often complain that even referring to sexual preference — or acknowledging the existence of more than just heterosexuality — is sexually suggestive. Some challengers even argue that a picture book showing two male penguins adopting an egg together is a sexually inappropriate story for children. This can lead to youth being denied access to important lessons about acceptance of meaningful expressions of love and intimacy.

The parent’s complaint about Harvey Milk being in the book is their right, but the school’s decision to cater to one parent over the education of their students reinforces that there is something inherently wrong about LGBTQ+ people. Imagine a children’s book being challenged for a profile on Martin Luther and his 95 Theses because a parent feels their kid is too young to learn about the existence of Protestants.

Representative Costa Howard spoke with The Daily Herald about the school’s decision,

“I have a great deal of respect for him and his staff, they had a process that they felt they didn’t vet all the way through, and I respect the process. I don’t necessarily agree with its outcome.”

The excuse Costa Howard offers for the school about not properly vetting the event sounds reminiscent of the city council of Leander in this past summer’s censorship of trans comics creator Lilah Sturges, who also had a Lumberjanes event cancelled abruptly right before it was scheduled to take place. That event was never rescheduled, with the majority of the city council refusing to acknowledge the censorship, and opt to use the time and attention to restrict their library meeting room policies.

Illinois has passed legislation requiring inclusive lessons in the next school year, so this won’t be the only opportunity DuPage County has to get this right. Hopefully they will straighten out their challenge policies, which are the core to protecting students intellectual freedom, and create a welcoming space for everyone in the coming years.