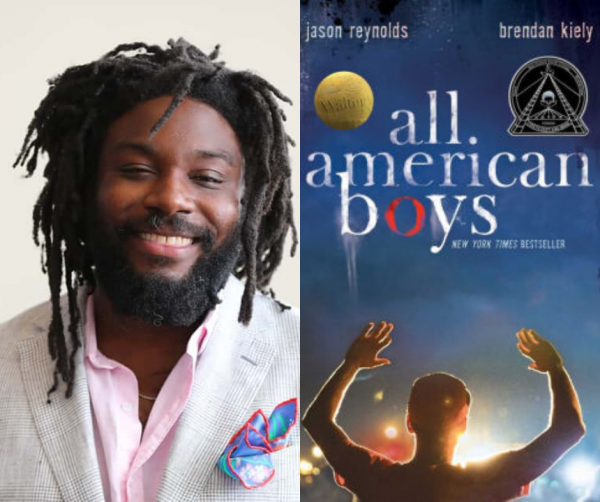 Popular author Jason Reynolds has been announced as the Library of Congress’ newest ambassador for young people’s literature. This honored position is a two year post presented to an exceptional author who will work to increase literacy and engagement with YA readers. Past ambassadors include Jacqueline Woodson, and CBLDF Board Member Gene Luen Yang. Reynolds is an award-winning author whose works include Ghost Patina, As Brave As You , graphic novel Miles Morales: Spider-Man, and many others. Last year CBLDF defended Reynolds novel All American Boys when South Carolina police publicly tried to persuade a high school to remove it from the reading list.

All American Boys was co-authored by Jason Reynolds and Brendan Kiely, and tells the story of Rashad, a black teenager, assaulted by a white police officer who mistakingly accused him of shoplifting. The other main character Quinn, a white teenage boy who is very close to the offending officer, witnesses the attack on Rashad. The book rotates between the two boys’ POVs as they grapple with rising racial tensions in their school and community, and figuring out where they stand amid these tragic events.
All American Boys was targeted with Angie Thomas’ The Hate U Give for being “anti-cop”, as both books were inspired by real life police violence against unarmed individuals. These deaths and violence have led to large changes in the cultural landscape, creating vast protests, movements like Black Lives Matter, and strong divisions between neighbors based on everything from racial prejudice to gun control. Books offer a chance for teenagers to discuss these situations, opening an important dialogue with their teachers and each other. CBLDF defended All American Boys saying,

Reynolds plans on focusing on children’s self-narratives with as well as kids from small towns and rural areas with his two year program GRAB THE MIC: Tell Your Story. He told CBS This Morning “I can’t claim to love children if I only love some of them. Sometimes we overlook the kids in Iowa, the kids in Nebraska, small town Alabama and upstate New York.”
Librarian of C1ngress Carla Hayden joined Reynolds for the announcement on CBS this Morning. When asked how to increase literacy among children Hayden said,

Sometimes we want young people to read the great novels and things and not a graphic novel,” but adults shouldn’t discourage that those types of books because reading is “like a muscle.”

We could not agree more. For more information on comics in the classroom, check out CBLDF’s 2019 Education Survey.