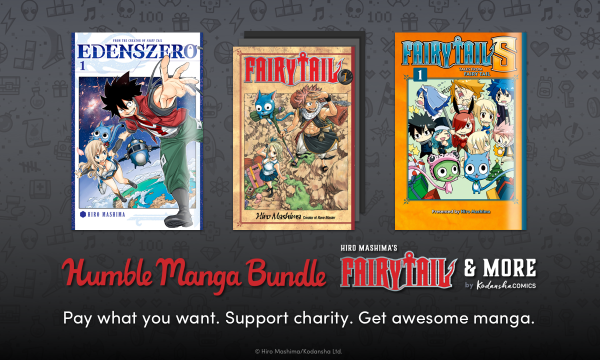 Whether you’re manga obsessed or interested but new to the medium, the latest Humble Bundle is an amazing deal. Starting at $1, you can grab a vast selection of Kodansha comics, including Hiro Mashima’s Fairy Tail and more! Every bundle purchased supports the critical efforts of Comic Book Legal Defense Fund and American Civil Liberties Union to protect free expression in manga and beyond!

The international award winning Fairy Tail is one of the best selling manga of all time! Set on a fantastical Earth-Land where guilds of wizards ply their trades, the story follows Natsu “Salamander” Dragneel of Fairy Tail, a guild notorious for leaving unintended damage in their wake, as he searches for his missing adoptive father. Fairy Tail ran in Japan’s Weekly Shōnen Magazine from 2006–2017, so you can get the entire tale now while supporting the important work of CBLDF and ACLU!