In this column, we’ll take a closer look at Persepolis by Marjane Satrapi. 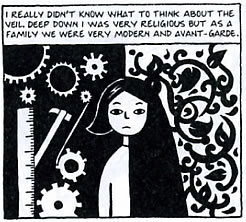