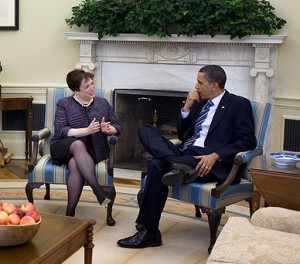 Eugene Volokh, law professor at UCLA, First Amendment scholar, and founder of the blog The Volokh Conspiracy, has reviewed Kagan’s First Amendment scholarship and finds himself coming away impressed even when he disagrees in profound ways with her conclusions. In particular, he finds that “Kagan’s First Amendment work suggests a general acceptance of current free speech law, and an attempt to better understand it and make it more internally consistent rather than to radically change it.” Additionally, from her scholarship on the legal concept of obscenity, Volokh thinks it’s unlikely that she will take significant steps to change those rules as they currently exist:

while she might tolerate some restrictions on pornography — probably limited to pornography that depicts violent sex — it seems likely that she won’t go much beyond (and likely not at all beyond) restrictions on pornography that already fits within the “obscenity” exception. I am no fan of the obscenity exception, chiefly because of its nearly lawless vagueness. But while it sounds like Kagan probably wouldn’t vote to get rid of the exception, or even go so far as Stevens to argue that obscenity could only be punished through civil enforcement and not the criminal law, it also sounds like Kagan probably wouldn’t materially expand the exception, or create similar exceptions to join it.

In an article on the Hollywood Reporter blog, provocatively titled, “Why Hollywood should be very nervous about Elena Kagan,” author Eriq Gardner cites what he sees as her advocacy of fair use, the legal rules that allow use of copyrighted works for criticism, commentary, parody, and teaching purposes. In her tenure as the Dean of Harvard Law School, she recruited Lawrence Lessig, one of the country’s most outspoken proponents of fair use and looser copyright restrictions, and she has written opinions as Solicitor General against major Hollywood studios in which she specifically invoked fair use.

However, Kagan has also issued opinions in her tenure as Solicitor General that have some First Amendment scholars worried. David L. Hudson Jr. of the First Amendment Center notes her support of a broad, vague law that bans depictions of animal cruelty, recently struck down as unconstitutional by the Supreme Court. It’s important to note that as Solicitor General, it’s her job to take the position of the government before the Supreme Court whether or not it reflects her opinion personally. “All attorneys are required to represent their sides zealously,” says Robert Richards, director of the Pennsylvania Center for the First Amendment Center. “It is more instructive to look at potential justices’ speeches and writings to get a glimpse into their own ideologies, temperament and philosophy of jurisprudence.”

Still, some critics have noted that her arguments on behalf of the government have gone above and beyond in attempting to limit speech. In a recent interview on NPR’s On the Media (full disclosure – I work for On the Media as an assistant producer), Chicago law professor Geoffrey Stone singles out her argument as incredibly and unnecessarily overbroad:

what Kagan’s argument invited was casting aside this very rigid, contained analysis of value and instead opened the door to a much more freewheeling approach. And it was a really dangerous – that’s Chief Justice Roberts’ words – it really was a dangerous argument for the Solicitor General to make. It would have, if accepted, completely revolutionized a large part of First Amendment doctrine, losing the gains we’ve made throughout the 20th century.

Northeastern University Journalism Professor Dan Kennedy also takes issue with her support of a ban of military recruiters from the Harvard campus during her tenure as dean. While she did not create the rule, according to Kennedy her support of keeping it in place became an issue in her confirmation.

If she is confirmed, it remains to be seen how she will decide on First Amendment cases that come before her. Having never been a sitting judge, Kagan doesn’t have a history of jurisprudence that we can reference to anticipate her opinions. More will likely come out during her confirmation hearings, but in the meantime, SCOTUS Blog’s massive article on Kagan contains links to several pieces of her writing on First Amendment issues.