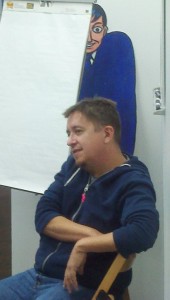 On Saturday, December 18th, the writer, and former Wildstorm Editor, John Layman (CHEW, GAMBIT) became the first Guest Lecturer to visit the CBLDF offices in Manhattan. An educational event and a fundraiser, seats were limited, and offered online through the “CBLDF Reward Zone” donation center, and quickly sold out. Twenty lucky fans were able to spend Saturday afternoon learning from a comics personality who is simultaneously a respected veteran and an overnight success.

Layman outlined his history in the industry, from journalism, up through Wildstorm, right into the breakout success of CHEW, his current Image Comics project with artist Rob Guillory. Explaining the finer details of developing and pitching ideas, and managing your creative properties, he was frank and informative, offering personal and insight from the trenches of the comics industry. Keeping things light and informal, Layman ended by answering questions from participants. Attendee Geoff Locke said of the afternoon, “John was candid and informative about the ins and outs of pitching a project. Plus, we learned Frank Quitely will do a variant cover for a box of Twinkies!” 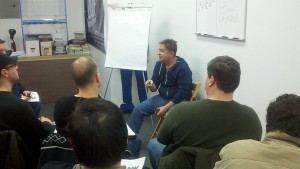 John Layman’s visit marks the first of a coming series of lectures and workshops to be held in the CBLDF offices over the coming year. These events will touch on every aspect of the Comic Industry, with experts and veterans guest lecturing on their respective fields. Look for names and specifics to be announced over the coming months.

Layman’s humorous and insightful lecture was a great start to what will no doubt be an amazing series. Thanks John!

← CBLDF Accepts Downs Intellectual Freedom Award at ALA Midwinter
The Transmetropolitan Art Book Is Coming — If You Make It So! →