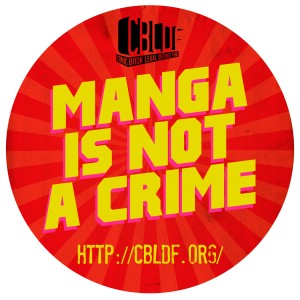 Manga is not a crime! Right now an American citizen is facing a minimum sentence of one year in a Canadian prison because customs authorities wrongly allege that horror and fantasy manga on his computer are child pornography. The CBLDF is helping him by assisting in legal strategy and by raising money to offset his legal fees, which are expected to reach $150,000.

Join the effort to defend this case by visiting the CBLDF’s table in Manga Artists Alley and signing up for membership! When you do, we’ll enter you into our Massive Manga Giveaway!

The top publishers in the manga industry, including Viz, Seven Seas, Vertical, Yen, Dark Horse, DMP, Kodansha, and ALC/Yuricon have contributed prize packages for teen and adult readers for each day of the show. Come learn about the CBLDF’s efforts to protect your freedom to read manga, and take home amazing books!