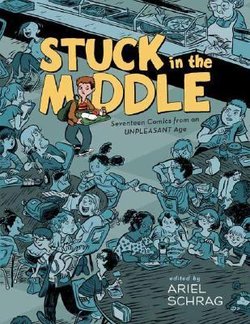 Later today, a hearing in Dixfield, ME  will address a parent’s call for removal of the anthology Stuck in the Middle: Seventeen Comics from an Unpleasant Age from the Buckfield Junior-Senior High School Library.

The Comic Book Legal Defense Fund and the American Library Association’s Office for Intellectual Freedom sent a letter of support for the anthology, which was edited by Ariel Schrag and includes contributions from award winning graphic novelists Daniel Clowes, Dash Shaw, Gabrielle Bell, Lauren Weinstein, and others.  The book received praise from professional review sources such as Booklist, New York Times, and Publishers Weekly, and it was selected for New York Public Library’s “Books for the Teen Age” list in 2008.

A PDF of the letter is available here: cbldf stuck in the middle letter

We are writing to you and to the school board members of RSU #10, on behalf of the Comic Book Legal Defense Fund and the American Library Association’s Office for Intellectual Freedom, to express concern about an effort to remove Stuck in the Middle: Seventeen Comics from an Unpleasant Age from the Buckfield Junior-Senior High School Library.  We understand that the book has been challenged due to objections to its language as well as references to drugs, alcohol, and sex.  In your evaluation of this request, we strongly urge you to uphold the freedom to read for all students in the district by retaining this book in the school library.

Stuck in the Middle presents seventeen stories by a variety of award-winning graphic novelists that address many of the issues and choices faced by teenagers today.  The book received praise from professional review sources such as Booklist, New York Times, and Publishers Weekly, and it was selected for New York Public Library’s “Books for the Teen Age” list in 2008.  The book’s editor Ariel Schrag, defending an earlier challenge, wrote:

In terms of foul language, sexual content, and teen smoking in this book, all the authors strove to present the teens and pre-teens in a realistic light. We may not like all of the decisions teenagers make, but if we sanitize their speech and behavior in our stories, our characters won’t be authentic. Real teens and pre-teens sometimes use these words and say and do these things. A book like this can present a good opportunity for dialogue between children and parents. Banning the book isn’t going to change children’s behavior or somehow save them from the hard truths of teenage life – I find it very hard to believe that a child would hear a swear word for the very first time in the book, or that he or she would be made aware that teenagers sometimes have sexual relationships or smoke cigarettes. The only thing that can make an impact in the way children act is communication, and this book provides a platform for that.

Like any book in the school library, Stuck in the Middle may not be right for every student at Buckfield Junior-Senior High School.  But the library has a responsibility to represent a broad range of views in its collection and to meet the needs of everyone in the community – not just the most vocal, the most powerful, or even the majority.  While parents and community members may – and should – voice their concerns and select different materials for themselves and their children, those objecting to particular books should not be given the power to restrict the rights of other students and families to access the material.

Reading is a safe way for young people to learn about the world in which they are growing up and to help them anticipate real-life problems.  Stuck in the Middle: Seventeen Comics from an Unpleasant Age provides perspective on those problems in a highly accessible form to help teens confront the often challenging and confusing issues that they face as part of their everyday life.  We strongly urge the RSU School Board to retain this valuable book in the library collection.  By doing so, the school will not only affirm the importance and value of the freedom to read, but will send a powerful message to its students – that, in this country, they have the right to read what they choose and the responsibility to think critically about what they read, rather than allowing others to think for them.