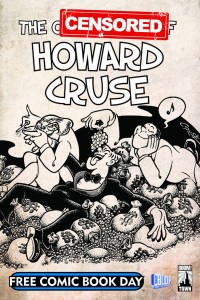 Published in conjunction with the Comic Book Legal Defense Fund (CBLDF), this book focuses on Howard Cruse, one of the more fearless creators in comics history. Being the first openly gay cartoonist, he was also the first editor of the anthology series Gay Comix. This book takes a humorous look at the man’s work as told in a world where the CBLDF didn’t exist and comics are censored for ‘our own good.’ Fortunately, and even though this censorship is funny on it’s own, this is merely a preview of the upcoming release The Other Side Of Howard Cruse from BOOM! Town (BOOM! Town is BOOM! Studios’ indie comics imprint). Naturally, this book isn’t for everyone, so if it isn’t for you then just don’t pick it up. There are references to homosexuality, politics and drugs. If these things offend you, then check out any of the other many books available on FCBD. Just don’t be one of those people who throws a fit and tries to make a federal case out of it because you happen to not get why this book is important. In all seriousness, however, this is a great preview for the upcoming release and we all know that the CBLDF does some great work in protecting not only readers rights but the rights and freedoms of creators around the country. They deserve our support.

4 Color Fantasies in Rancho Cucamonga, California (7172 Archibald Avenue), is upping the ante with their Fanboys vs. Zombies dunk tank! For $1 a throw, fanboys can have a go at dunking zombies, with proceeds benefiting CBLDF’s important First Amendment work. Store manager Chris Brady tells us that fanboys will get to make their throws using Thor’s hammer (a foam version, that is)! Brady expects 2,500 comics fans for a plethora of signings and events to celebrate FCBD. You can get all the details here.

Celebrate comics this Saturday, May 5, with CBLDF and fans everywhere. Happy Free Comic Book Day, everyone!