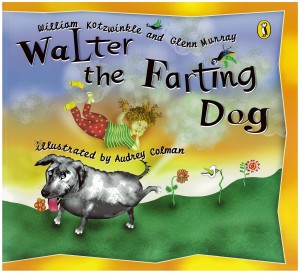 A Canadian research survey to gauge librarians’ reactions to youth literature dealing with bodily functions has found widespread acceptance of books such as Walter the Farting Dog, Everyone Poops, and Captain Underpants. Librarians report that the titles are enthusiastically embraced by many children, particularly boys and reluctant readers, but that discomfort on the part of parents sometimes leads to book challenges.

University of Alberta professor Ann Curry interviewed 16 librarians from across Canada for her paper entitled “Bums, Poops, and Pees: A Scholarly Examination of Why Children Love and Adults Censor the Scatological in Children’s Books.” As summarized in an article published in the National Post, she found the librarians to be in favor of holding such books in their collections:

All of the librarians ‘strongly defended’ the place of scatologically themed books in the public library system (hey, even Beowulf and Shakespeare included references to feces). More than half said the ‘intellectual freedom rights’ of children to have access to books they enjoy was important. Many said they used such books as Walter the Farting Dog to encourage boys to read, in light of troubling literacy data that shows boys don’t enjoy tucking into a book like girls do.

Having a book in the library that celebrates this taboo is ‘something they find really funny’ because they know they’re not supposed to exclaim the words out loud….It also helps make children more aware of their bodies, able to identify their various parts and not be ashamed.

Nevertheless, librarians told Curry that certain parents do object to the presence of such books in the library. Some feel that libraries should collect only what they define as quality literature, while others complain that the books “brought out ‘animalistic’ tendencies in their children instead of ‘higher moral thoughts of a well-behaved child.’” Formal challenges have declined in recent years, however, as public discussion of bodily functions has gained wider acceptance.

Although Curry’s research is focused on children’s literature, YA and adult books containing frank descriptions or imagery of the human body and its functions also frequently meet with resistance from some members of the public. In fact, the second-most challenged books in the United States in 2011 were The Color of Earth series, a set of Korean manwha which have been roundly praised in reviews for their honest and heartfelt depiction of a young girl’s journey into adolescence. According to the American Library Association, the reasons cited by those who would like to have the books removed or restricted in libraries include nudity, sex education, and sexually explicit content. More recently, the school board in Annville-Cleona, PA removed the picture book The Dirty Cowboy from district libraries due to the partial (and cleverly concealed) nudity of the title character who removes his clothes to take a bath. Despite protests from local citizens, the board has thus far refused to reconsider its decision.

CBLDF is an official sponsor of Banned Books Week, which will occur this September 30 – October 6. Banned Books Week is dedicated to “celebrating the freedom to read and the importance of the First Amendment.” CBLDF is currently creating tools for retailers and librarians to raise awareness of important challenged and banned comics and graphic novels during this year’s 30th Anniversary Banned Books Week Celebration. To get a head start on the festivities, please check out the CBLDF Rewards Zone, where we have items such as our I Read Banned Comics t-shirt available to help raise money for this important program.