Alan Moore is a legend of the comic book industry, recognized as one of its best writers. He has won numerous awards for his works, including for his run on Swamp Thing, Watchmen, Batman: The Killing Joke, and The League of Extraordinary Gentlemen, among others. Widely acclaimed both within the industry and without, Moore’s work is frequently subject to library challenges. From Watchmen to the more recent challenge against Neonomicon, let’s take a look at some of the challenges to Moore’s work. 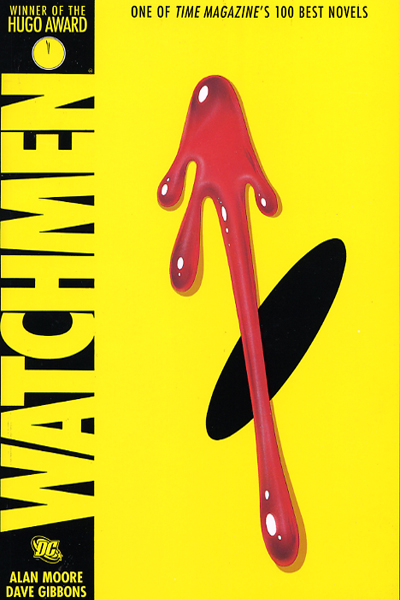 The Watchmen series (with Dave Gibbons) likely needs little introduction to CBLDF blog readers. The alternate history in which a group of retired crimefighters investigate and attempt to stop a plot to murder them has been praised by critics and fans alike since its 1986 debut. It received Kirby Awards for Best Finite Series, Best New Series, Best Writer, and Best Writer/Artist; Eisner Awards for Best Finite Series, Best Graphic Album, Best Writer, and Best Writer/Artist; and in 1988, a Hugo Award. It was instrumental in garnering more respect and shelf space for comics and graphic novels in libraries and mainstream bookstores, and in 2005, was the only comic to appear on Time Magazine’s “ALL-TIME 100 Greatest Novels” list.

The League of Extraordinary Gentlemen: The Black Dossier 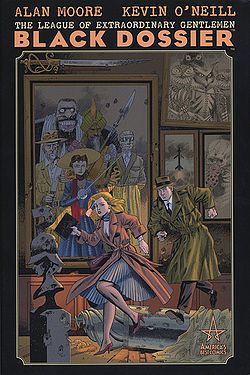 In 2009, two employees of the Jessamine County Public Library in Kentucky were fired after they took it upon themselves to withhold the library’s copy of Black Dossier from circulation. Sharon Cook, a full-time Library Assistant who objected to sex scenes in the book, initially followed the library’s established challenge procedure available to all patrons. She requested that the book be moved from the Graphic Novel section (which she thought was too close to Young Adult) into Adult Fiction. The committee considered her challenge and found that the book was properly shelved. In response, Cook checked the book out of the library and continued to renew it for about a year, thereby making it unavailable to members of the public. When a patron hold eventually prevented Cook from renewing the book, she used her staff privileges to determine that the requester was an 11-year-old girl. At that time Cook confided in a co-worker, part-time employee Beth Boisvert, who in turn cancelled the hold so the patron would not receive the book.

Cook and Boisvert considered the material in the Black Dossier pornographic, but the book has never met the standard for obscenity. Neither Cook nor Boisvert were librarians (despite what some sources indicate), and they superseded their authority and committed censorship in taking the actions they did. All library employees should strive to uphold the American Library Association Code of Ethics and the Library Bill of Rights (not to mention the Bill of Rights that includes the First Amendment). Instead, Cook and Boisvert violated several tenets of both, and their actions resulted in their termination.

In an article for the ALA, Robert Doyle describes a petition that demanded the revision of the library’s collection policy as a result of the controversy:

A petition with 950 signatures was presented to the board to overturn its collection
policy. The petition specifically asked for the removal of four works on the grounds that they “offended me in that they depict sexual acts and/or describe such acts in a way that in my opinion are contrary to the Jessamine County public opinion” of what should be in a public, taxpayer-supported collection. The petition concluded the works constituted a public safety issue in that they encourage sexual predators.

Alongside The Black Dossier, the petitioners were trying to remove Chuck Palahniuk’s Snuff and two DVDs: Choke and Ron White: You Can’t Fix Stupid.

Library director Ron Critchfield came under attack for the firings, including threats of physical harm. The book was moved to a separate section of the library, but access to the book remained unrestricted.

In June, Neonomicon, the Bram-Stoker Award winning series from Alan Moore and artist Jacen Burrows, was challenged at a library in Greenville, South Carolina. The book was shelved in the adult section of the library, which is generally restricted to minors unless they have parental permission. A 14-year-old girl who had permission from her mother checked out the book. After asking her mother about a profane word used in the book, her mother looked at the book and filed a complaint. Carrie Gaske, the mother of 14-year-old Jennifer Gaske,  told CBS 7 on Your Side, the Greenville CBS affiliate, that the book looked like a murder mystery comic book. Displaying a common misconception about graphic novels, she considered it a child’s book. CBS 7’s coverage of the story was unbalanced, focusing most of its on the content of the book, not on the fact that the book was appropriately placed in the adult section and that children need parental permission to check out those books. The book was challenged for sexual content, which the mother described as “pornographic,” and is currently unavailable to library patrons pending review.