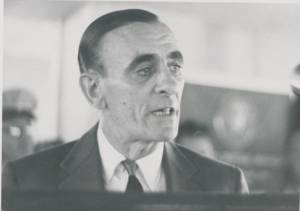 A historical milepost article on The Columbus Dispatch website, an Ohio-based periodical, revisits September 28, 1954, when the city’s mayor composed a panel to review the censorship of comics.

In assembling the panel, Columbus mayor M.E. Sensenbrenner noted that the FBI and behavioral psychiatrists, such as Fredric Wertham (known for the persecution of comic books in Seduction of the Innocent), believed comics led to juvenile acts of violence. Sensenbrenner decided to assemble a committee with the goal of banning the medium.

From the Dispatch article, by By  Gerald Tebben:

The proposal included a justification for the censorship: “Many of our newsstands have become flooded with books, magazines and pocket novels prominently featuring acts which depict crime, violence, obscenity, lewdness and acts which convey sexual impressions.”

Though the push for censorship and outlawing of comics was supported by the Columbus city council, it lacked support from the public. Ironically,  Sensenbrenner’s proposal flopped despite nation-wide admonition of comics by prominent political leaders, such as J. Edgar Hoover and the moral panic caused among the public by Wertham’s book:

The city council was sympathetic to the mayor’s request, but council members maintained that state law already addressed the problem and questioned whether the proposed ordinance would apply to children’s fable books and illustrated Bible stories as well.

The issue gained little traction in the community. Sensenbrenner twice went on television to drum up support for the proposal, but only a handful of citizens appeared interested at the Oct. 18, 1954, city council meeting.

Even with the lack of public support for Sensenbrenner’s censorship laws, the comic industry eventually devolved in to self-censorship. According to the Dispatch article, an industry-led censorship committee was formed the same month that Sensenbrenner proposed his committee:

Industry self-policing put the issue to rest. The Comics Magazine Association of America, formed in September 1954, established a code of ethics that prohibited, among other things, excessive violence; disrespectful depiction of police and judges; and the portrayal of vampires, werewolves, ghouls and zombies.

Even though the Comics Code Authority the resulted from industry censorship is now defunct, the harsh censorship and banning of comics is still prevalent. During Banned Books Week, celebrate your freedom to read by picking up one of the many commonly banned and challenged comics.

Given their visual nature, graphic novels and comic books are among the most-challenged books in libraries and schools. CBLDF is an official sponsor of Banned Books Week, which takes place September 30 – October 6, 2012. Please help support CBLDF’s defense of your right to read by making a donation or becoming a memberof the CBLDF!