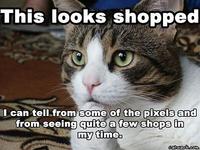 For the second year in a row, there is a bill in the Georgia legislature that proposes to outlaw using Photoshop or other digital imaging software to make someone appear to be nude or engaged in sexual activity. The Democratic-sponsored House Bill 39 came to our attention recently after one of its co-sponsors demonstrated a profound lack of understanding of the First Amendment. A few weeks ago, right-wing blogger Andre Walker commented on HB 39 by Photoshopping Rep. Earnest Smith’s head onto a nude porn star’s body. In response, Smith told the Savannah Morning News that this was exactly the sort of thing he and his colleagues wanted to put a stop to and that “no one has a right to make fun of anyone….It’s not a First Amendment right.” However, a slew of precedent begs to differ with Smith’s statement.

Our cherished right to make fun of people, particularly public figures such as Rep. Smith, was in fact affirmed by the Supreme Court in the 1988 case Hustler Magazine, Inc. v. Falwell. Five years earlier, Hustler published a parody ad featuring conservative commentator and televangelist Jerry Falwell. The ad, spoofing a well-known Campari Liqueur campaign, “portrayed [Falwell] as having engaged in a drunken incestuous rendezvous with his mother in an outhouse.” Falwell sued for libel and infliction of emotional distress. A lower court threw out the libel claim due to the obvious parodic nature of the ad (which even included the words “ad parody — not to be taken seriously”) but found in Falwell’s favor on the emotional distress claim. Hustler and its publisher Larry Flynt appealed the decision all the way to the Supreme Court, which ultimately ruled that:

[P]ublic figures and public officials may not recover [damages] for…intentional infliction of emotional distress by reason of publications such as the one here at issue without showing, in addition, that the publication contains a false statement of fact which was made with ‘actual malice,’ i.e., with knowledge that the statement was false or with reckless disregard as to whether or not it was true.

Since the lower court had already established that parody does not qualify as libel, that was the end of that. Likewise, most Internet users could likely identify Andre Walker’s image of Rep. Smith as a Photoshopped parody, even if it weren’t emblazoned with the words “FAKE IMAGE” in large red letters. Certainly, the possibility exists that a skilled Photoshopper with more nefarious intentions could create an actual convincing image of, say, a politician accepting a bribe or visiting an underage prostitute — but this would already be a crime under the state’s existing defamation law (§ 16-11-40):

A person commits the offense of criminal defamation when, without a privilege to do so and with intent to defame another, living or dead, he communicates false matter which tends to blacken the memory of one who is dead or which exposes one who is alive to hatred, contempt, or ridicule…

HB 39 also attempts to redefine the word “obscenity” for its purposes. Georgia law already contains a fairly standard definition of obscenity based on the Miller test at § 16-12-80:

Material is obscene if:

(1) To the average person, applying contemporary community standards, taken as a whole, it predominantly appeals to the prurient interest, that is, a shameful or morbid interest in nudity, sex, or excretion;

(2) The material taken as a whole lacks serious literary, artistic, political, or scientific value; and

(3) The material depicts or describes, in a patently offensive way, sexual conduct specifically defined in subparagraphs (A) through (E) of this paragraph:

(A) Acts of sexual intercourse, heterosexual or homosexual, normal or perverted, actual or simulated;

(D) Acts of bestiality or the fondling of sex organs of animals; or

In order for material to be deemed obscene (and therefore illegal to sell or otherwise distribute in Georgia), it must meet all three of the conditions above. HB 39, however, simply states that in the context of the proposed law, an “obscene depiction” is one “of an individual displaying nudity or sexual conduct.” Even if the bill does manage to pass and be signed into law by the governor, this definition contradicts existing state law and Supreme Court precedent, which almost certainly ensures that it would be struck down when challenged in court. Here’s hoping it doesn’t come to that, though — the House of Representatives has not yet taken substantial action on the bill and seems unlikely to do so before next week’s deadline for legislation to transfer to the Senate.