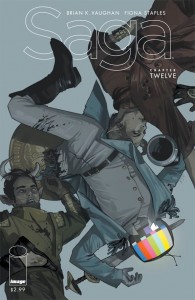 Earlier this week controversy spread over the temporary ban of Saga #12 on comiXology’s iOS app because of two small depictions of gay sexual content within the context of a larger sequence of images. The images in question appear on the faceplate of the character Prince Robot IV, who possesses a television monitor for a head, while he lies wounded on a battleground. The two images are reproduced below, and both feature NSFW content. 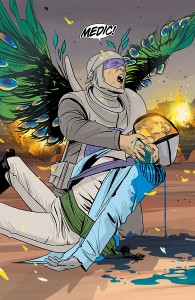 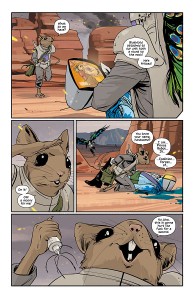 As I wrote yesterday in our story covering the ban, it would be within Apple’s rights as a private company to refuse to carry the comic.  The same is true of any brick and mortar retailer who refuses to carry the book — it’s their business prerogative to determine what they choose to offer.

That said, it’s important to note that while the images are sexually explicit, they and the issue that contains them are protected by the First Amendment. Retailers have a right to sell Saga #12, readers have a right to possess it, and the creators and publisher had the right to create it.

For Saga #12 to be unprotected by the First Amendment, it would need to be found legally obscene — an outcome that is highly unlikely.

In Miller v. California, the Supreme Court created a three-prong test to determine what is obscene. In what is commonly referred to as the “Miller test,” the court mandated that states can regulate material as obscene if it meets all three of the following prongs:

Obscenity is always determined by applying local community standards, so each community will have different metrics in determining a whether a piece of work is obscene or not. However, each community must take the work as a whole. This means that all of the contents of Saga #12 must be considered, not just the offending images. Therefore, the entire issue considered as a whole must appeal to the prurient interest, it must depict or describe sexual conduct or excretory functions in a patently offensive way, and it must lack serious literary, artistic, political, or scientific value.

Opinions will vary about the merit of the content in Saga #12, as they will with any comic book. However, the likelihood of the material being found to violate all prongs of the Miller Test is extremely slim.

Each retailer must independently determine what they will carry because they are the best expert with regard to knowing what material their community will accept.  However, that business decision should be informed by the knowledge that the contents of Saga #12 are protected by the First Amendment.